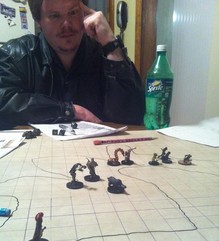 Jeff Scott spent his whole life searching for the meaning of all things. After given that up he spent several years at Hussian School of Art earning an Associates in Specialized Technology, or to put it straight – he draws well, very well. He also dabbled with writing, film-making, and stand-up comedy, earning him several awards that were lost in the mail. You can check out some of the short-films he did for his church on his YouTube page. And if you ask really nicely, he’ll let you read his work. Jeff had always been into gaming, whether it was video, board, or role. Jeff cites the Parker Brothers “Clue” as the reason for bring board games into his life. It was only in the summer of 2009, when Jim Reed came to Jeff and told him a dream. A dream to one day host a podcast about board gaming. Since then Jeff was thrust into the “Dark abyss of gaming” as he likes to say.

After bouncing around to find the spark that would launch their show Jeff and Jim sat for a few minutes and finally after a random comment from Jeff, they came up with a name, the name to end all gaming podcast names. And thus NJAGP was born. Soon after Matt Mchale came aboard and the group was complete 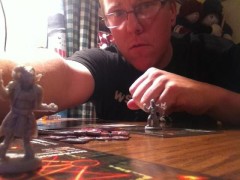 Jim Reed is married to Anastasia and they have two childern, Quinn and Avory. He is a commander in Royal Rangers, a “Boy Scout” like organization associated with the Assemblies of God. He is also the producer of a haunted attraction held in New Jersey at the Burlington County Prison Museum. www.prisonhaunt.com This is where Jim and Jeff met Matthew.

A big gamer his whole life, Jim started playing Heroscape in 2005. In the same year, he discovered a few podcast including The Dice Tower and Board Games With Scott (not Jeff) He was pulled into the world of gaming, then he started pulling in all those around him. In 2006 he began working for The Dice Tower podcast as a contributor and production assistant and he is still with them. Exposing more people to the gaming hobby is one goal for Jim and a main reason for him wanted to do a podcast. That, and having a ton of fun 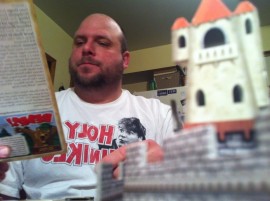 Matt does a podcast. He likes games and stuff.