Don't Judge It By Its' Cover!

The forest is full of activity. The King of the Fairies will soon return from a long journey, and everyone wants to receive him properly!

As the leader of one of the noble families of Fairykind, you compete with the others to impress the King with a splendid reception: Collect gorgeous and fragrant flowers and gather loyal animal friends while avoiding the tricky goblins and clumsy ogres! You will have to use the Fairies of your family to explore the forest and collect the most splendid ingredients for the perfect reception and gain the aid of the wise Druids and the Fairy Queen herself!

Who can impress the King the most? Will it be you? 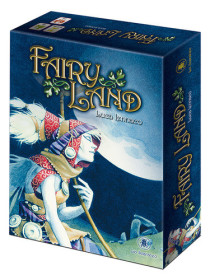 Gazing across my immense collection of games, you may be well suited to notice that I have very few games that implement the mechanics of set collection and/or auctioning. I also don’t keep it a secret that I place those mechanics pretty far down the list of my favorites. There are exceptions of course, which I’m not going to list now, but there are.

When I first popped open the box for Fairy Land, the first thing I noticed was the beautiful artwork. It’s basically all done with colored pencils, which I haven’t really seen used much in a game before. the second thing I noticed, was that the game was a set collection and auction card game.

Let’s not beat around the bush with this review. I had a really fun time playing this game as well as the times I have played it since. The biggest problem I have with the game has nothing to do with the game itself. it has to do with the fact that i just suck at auction games. That reason probably compliments my dislike of the mechanic.

The animals all have a set point value that is based on the number of cards. So the bear has two cards and the player with the most bear gets 2 points and the fox has 8 cards so the player with the most foxes scores 8 points. I really like this aspect of the game. Since the more cards of a particular animal in the game means more of a battle to get the most, you really can strategize about how many you need to have majority. It helps you to be able to be more selective when bidding.

What you’ll be bidding on is one of three rows of cards, called clearings. A player draws two cards from the forest deck on their turn and adds them to the clearings (Following some placement rules). Then the player can open up bidding on ONE of the clearings with the current player having the final bid.

There are also negative cards in the game such as Goblins and Ogres.Ogres force you to discard cards you own and Goblins subtract points for the player who has the most at game end. An obvious strategy is to place these cards in rows your opponents probably want. 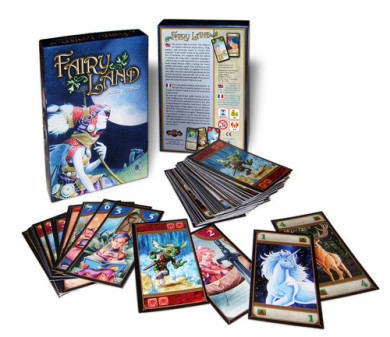 Each player has a hand full of fairies they will be using to bid with valued 1 thru 7. Once fairies are used they are out of your hand. However, each player has 1 Fairy Crest card that when played, allows you to take all the fairies you have used thus far and return them to your hand. Utilizing this card at the right time is very important.

For the first play of this, expect a little frustration as players will not know the range that the bidding should be in. My group had no idea if we would be bidding 5 to 10 times or 20 to 30 times. Some first time players will probably overbid early and then be stuck with no fairies to bid with late in the game and others may be too conservative and not bid enough. Once you get a feel for the pacing of the bidding, future plays should tighten up.

Another type of card that will be appearing are special fairy cards. These will also go into a clearing and be won during bidding, however unlike the other cards which just go in front of the players, the special fairies go into your hands and can be used for future bidding. All of them are only worth 1, but they each have a special ability such as killing off any Goblins and Ogres won with them, or they may be worth higher values depending on how you use them.

If you don’t want to bid on a clearing on your turn, you have other options. You can visit the druids or visit the Queen’s Court.

The druid pile is just made up of 9 randomly drawn cards from the forest deck. If you decide to visit the druids, you just play any number of fairy points from your hand, and you can look at that many number of cards from the druid pile minus one, then you may take any ONE card. It can be useful to look at as many of these as you think you can afford early on so you know which animals are in this pile and you may even be able to find one of those special fairy cards in there.

The Queen’s Court is visited the exact same way, but this pile is made up of 9 special items. (Out of a possible 19. You randomly choose 9 each game so that every game has a different mixture of these item cards.) These items are cool! Some of them are permanent items that allow you abilities such as bidding two more than you pay or looking at extra cards in the Queen’s court and druid piles. Some of them are one time use abilities such as swapping cards in the clearings or forcing other players to discard animals or flowers.

Once the Queen’s court or druid piles are emptied, they are not replenished. The game ends when the forest deck runs out of cards.

Fairy tale is a game that mechanically and thematically seems very simple, but under that surface is a complex system that really requires a sound strategy and delicate decisions. This is a great filler card game that can be enjoyed with younger kids (I’d say no younger than 8), families, and hard core gamers.

Sadly, I think that because of the light hearted theme and whimsical artwork, this one will be passed over by the hard core, seasoned gamers. Perhaps this review will shed some light on this small box of a game which is designed by Luca Iennaco who also designed the incredible game Kingsburg, and more people will give it a try.