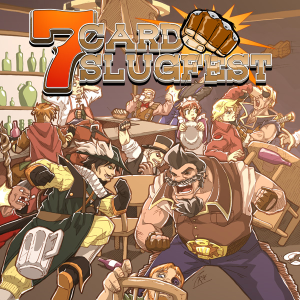 I know nothing about the Land of Indines that many of Level 99's games are set in. I don't know a thing about the characters of 7 Card Slugfest or their back stories in the game. I'm not even sure how much this is a game rather than an activity. What I do know, is that every time I've brought this game out, all the players have laughed and had a great time.

In 7 Card Slugfest, you take on the role of 1 of 11 unique characters and engage in a bar room … “slugfest”, by simultaneously playing cards which represent your punches, into a pile next to one of the other players characters. (Or the non-player bartender who just gets to take a beating but throws no punches.) You only have 7 of these “punch” cards and you can only draw 1 at a time. The cards have a number on them representing the power of your punch. Some of them are special move punches.

Each character has a base life point value of 10, but the first player to play all their cards during the round can snag a token giving their character +3 life points. The last player to finish playing his cards must take a -3 life points token. 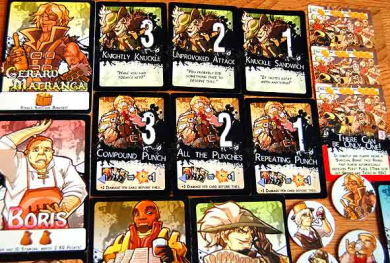 The overall object of the round is to do the blow that KO's (knocks out) a character. All other punches played before the KO just subtract from the characters life points and all other punches played after the KO are ignored. It may happen that a charter does not receive enough damage worth of punches to be KO'd. In this case, the owner gets a “survival bonus”. (Also another reason those life point tokens are important to play.)

When cards are played onto a pile, all players will see the damage that card does. (With the exception of one of the characters whose special ability is that his punches power is hidden.) This will not be easy but you'll want to try and pay attention in hopes of playing the card at the right moment to do that KO punch.

One characters punch card is worth a power of 3, +1 for each card played before it. So you'll want to stick this punch card on top of a pile that already has a few cards in it. One card has a power of 6, but that card can not KO a character. (The character remains dazed with 1life point remaining after the punch.) So if you play this one, you'll probably hope to be fast enough to play the next one onto the same pile. Some special cards discard other cards played, some get to be reinserted in the pile, and some show false values. 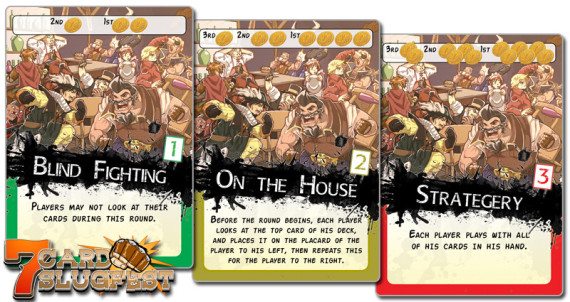 Once a round, or “stage”, is over, a stage scoring card will award coins to a certain number of players with the most KO tokens. These stage cards may also have special rules for the round that will mix things up and have players switching strategies. I use the term “strategy” loosely here because the game really does not have much room for it. A round usually takes about 30 seconds, in which time you have no time, to carefully pay attention to all the stacks of cards and be able to draw and play your cards fast enough and strategies about the best pile to play hem. More often than not, you're just going to have to hope you're lucky enough to have played your punch on the right pile at the right time.

But who cares! If you're a deep strategy player run away from this one. Go build a wine vineyard on the Nile. 7 Card Slugfest is a game that plays its theme out on the table. Bottles are flying, tables are being overturned, a piles of cards are being knocked over. Characters are getting punched, players are smashing their hands together, and the entire time, everyone involved is laughing and having a great time!