Not A Quandry, A Quick Quarriors Review. 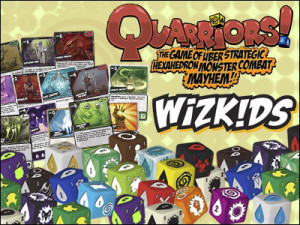 Quarriors is a so called dice building game. The game comes with 130 quaint custom 6 sided dice that are quite nice. None of the dice are your standard 1 to 6 on them with pips or numbers. There are three main types of dice quiddity, spells and creatures.

Quarriors is a game that was not much on my radar for 2011. After the first couple of times I played it, it quickly became one of my favorite games. Is it a complex game? No. Is it a long game? No. Is it a deeply strategic game? No. Will you quaff over every turn? No. Does it have a serious theme? Again no, but the real question is, Is it fun? And for me yes Quarriors is quite fun. I have no qualms about it. Some may quarrel that the game it too random, but it’s a dice game so let’s not quibble over that.

The game is for up to 4 players that can sit in a quadrangle (I know I really stretched for that Q). All players will start with the same number of basic dice. On each players turn 6 dice are pulled from their dice bag. Most of these dice will get you quiddity (used like money). Get enough quiddity and you will qualify to buy more dice. You can buy spells or creatures. Creatures are used to attack other player’s creatures and have them quake with fear. Creatures also are how you score. Each different creature die has a number of glory points (victory points) associated with them. You score if your creatures are still out in front of you at the start of your turn. Spells unusually do not score you points but can be used in a number of way to crush you enemies or quell plans they may have to crush you. You are trying to get a number of glory points that depends on the number players in your quest to win.

I will end this quirky review by quietly saying I love this game. When I want to just play a light fun game Quarriors can quench my thirst.

Expanded By: Rise of The Demons (Available now) & Quarmageddon (Out June 2012)