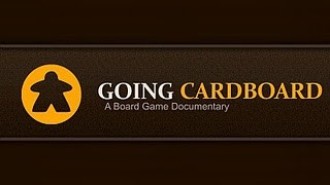 "So what do you do for fun?"
"Well, I'm into a lot of things but I really enjoy spending time playing board games."
"Oh we also play games once in a while. We love Uno. Have you ever heard of Apples to Apples?"
"Um, Yes."
"We usually get a night in every few months. How often do you play?"
"I guess about 2 or 3 nights a week."
"What? Man, I don't like Uno that much. Guess you play Monopoly a lot?"
"Not really."

You know where this is going. You know how many times you've engaged in this conversation. Sometimes it just ends there and sometimes you're ask to give some games you like. You always know the next line after that. No matter what list of games you say, the response is always the same.
"Never heard of those."

How many friends or family members just don't get it? How many would you like to see understand why you love board games? Sure, the best thing to do is set up a time to invite them over and play some games with them. If there's just to much deference in schedules or the distance is too far, maybe you can recommend a few games for them to try, or better yet get them one for a gift.

Well, now there's another way to introduce people into this wonderful world of board gaming. It's a fabulous documentary by Lorien Green called "Going Cardboard".

Going Cardboard does an excellent job showing how the Perception of the world of gaming is very much like those who are always on the opposite side of that conversation from you. Then, the documentary shows why that perception should be shattered as the influence of the "German style" games have began a phenomenal transformation of the gaming world in the United States.

Yes, sorry for those of you in other countries but this Documentary does focus more on the American influenced side of gaming.

Am I convinced that this Documentary will transform all viewers into gamers, well no, it hasn't been out long enough to make such a bold claim, but I think that the process of which the film shows off such a great variety and styles of games and gamers, can and will change the misconceptions of the hobby. I believe it can influence many people just by the films superb showcasing of the things I just mentioned.

Now, looking at the other side, those already into the hobby, what will this film do for them? Well, it's very insightful into the inner working of publishers, the challenges of designers, and the thoughts of the average gamer. Wither you're well schooled in the hobby or a casual fan, you will find something new. Oh yea, and it's pretty darn entertaining too.

Just for good measure, the Film comes with a free game called "Shootout", designed by one of the most well known designers in the industry, Reiner Knizia.

Every gamer should own at least one copy of this documentary. Hats off to Lorien Green and her tremendous effort in getting this film made an to her loving passion of this great gaming hobby industry.

For more information on the wonderful film, please visit   www.boardgamemovie.com