A Pasted On Theme, I think not. 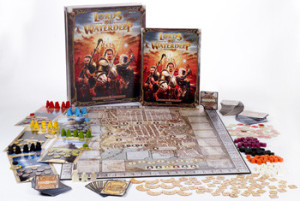 A pasted on theme, I think not.

"It's a Euro with a theme pasted on."

It seems to be one of those defining definitions to the Wizards of The Coast board game Lords of Waterdeep.  I've heard it explained this way over and over.

This phrase "pasted on theme" has me really bothered recently and even more so now with this game.

According to Board Game geek -  "pasted on" (theme): adj. A term given to a game by people who think that the links between the game's theme and mechanism is weak. Or in other words, the designer created the game's mechanism first and abstractly, and applied the theme afterwards.

I guess my biggest problem is that games that seem to get this Term "tagged" to them get it as a negative description.

On the other hand, all theme and crappy game play or great game play with no theme, alienate groups of gamers. When a game comes along and beautifully masters the two, it should be recognized  not scrutinized.

I give you Lords of Waterdeep, a game with some of the smoothest mechanics I have ever seen and dripping with so much theme you better bring extra napkins.

LoW is a worker placement (you have "agent" pawns you'll be sending out to perform actions for you) resource management (your agents will be collecting or "recruiting" adventurers that you will gather and send out to perform quest) game.

Your role is one of the Lords in the Dungeons and Dragons city of Waterdeep. Your objective is to obtain the most influence (or victory points) after a set number of game rounds.  Using your agents to hire fighters, wizards, rouges, and clerics to complete quest for you is one way to earn victory points. Another is to have your agents sent out and pay gold to have buildings built in your factions name. The buildings earn you VPs, as well as provide additional locations for agents to use. If other players agents use a building you control, you also get a benefit. (this benefit varies and can be some gold, extra adventurers, more influence, and more.)

There are always 4 quest that your agents can acquire and you start the game with two. All the quest require a set amount of adventurers to be sent on them and sometimes they also require some gold. Each one (with a few exceptions) grants the Lord who completes it VPs and sometimes other benefits such as gold, more adventurers, and if it's a plot quest, you may receive game long abilities and bonuses.

Example: Quest name-Infiltrate Builders Hall. The picture is of a rougue sneaking through an office. The text - "Find out what the Guild of Stonecutters, Masons, Potters, and Tilemakers is up to." The Requirements-Two Fighters, Two Rouges, and 4 Gold. (It fits perfectly) The Reward-(it's a plot quest which offers ongoing benefits) Score 6 Victory Points now and 4 extra whenever you build a building.

Attention to detail like this comes through on every card. You can revel in this theme or simply just ignore it altogether.

One of my favorite aspects of this game I have yet to mention is intrigue cards. You get two to start the game and there are a few places in Waterdeep where you can send your agents to obtain more as well as a few ways to obtain them with new buildings.

There are three types of Intrigue cards. 1. Utility (the majority of the intrigue cards) - when played usually give the player some sort of instant benefit or instant reward and sometime may reward other players 2. Attack - when played usually cause other players to loose adventurers and the current player usually ains something from it.
3. Mandatory Quest - are played on other players forcing them to complete these quest before any others and they are often of little reward.

There is only one place in Waterdeep (Waterdeep Harbor) to send your agent to play an Intrigue card but three different agents can go there each round. What's cool about this place, is that you get to play your card, then at the end of the round, after all the agents have been assigned, the agents in Waterdeep Harbor get to be reassigned in the order they were placed their.

Lastly I should mention that each quest card is of a specific type (6 in all) In setup, each players received his Lord card and these Lords have two specific quest types the prefer. At game end, any quest the player has completed that matches his Lords preferred type gains 4 Victory Points each. Money and unused adventurers also give some game end VP bonuses so the final tally is always unknown when the game ends. (There is also one Lord who prefers give bonuses for owning buildings rather than completing quest)

With out a doubt, this game is my favorite of 2012 and I am very tempted to place it in my top 5 favorite games of all times!

Also, there are over 20 building tiles and only 10 (with a few exceptions) can come out each game which really helps to mix up play from game to game. I know WoTC is planning expansions for this, and I can't wait to see what they're planning.

This has also become one of my go to games for new gamers. It's so deep but yet I have learned to explain the rules in 5 minutes, and everyone seems to catch on very quickly. It may take a game or two to really grasp all the strategy of the game, but it will only take one game to hook you in!

Published - 2012 Wizards of The Coast