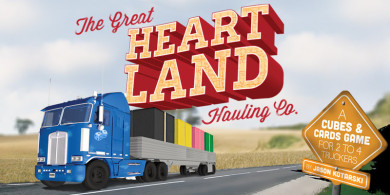 Let's face it. We're all a little prejudice. Admit it. We've all done it.
We've all been guilty of judging a game by its box size, or its cover, or its theme.

With he Great Heartland Hauling Company, I did a little of all three.
Such a small box, and, it has a picture of a tractor trailer on the
cover. Yawn. Oh, you're loading and delivering cargo? Ugh. I've
worked in the the business for almost 19 years now, the last thing I
want to do is play a game about it. Well, I finally gave it a try
when a friend brought the game to my house. This is what I thought.

The Great Heartland Hauling Company is a pick up and deliver game at a
very basic level. Players are transporting goods to earn money and
the first player to a set dollar amount is the winner of the game.
There are 4 goods. (Corn, Soybean, Cattle, and Hogs) There is no
board, instead, cards are placed randomly out in a pre determined
pattern (which is different for various player count) to create a
road map. Each card represents one location. These locations will
have 1 good they sell, and two different goods they will buy. 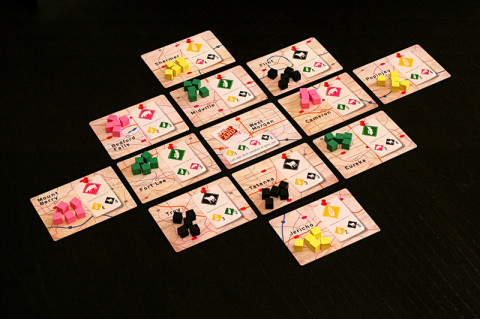 On your turn you must move your truck from 1 to 3 spaces (cards). You
can not end your movement on a space already occupied with another
players truck. Then, you will probably be loading goods or selling
them. Your truck has space for up to 8 cubes (goods). How you move,
load goods, and sell them is what gives this game another level.
You'll have a hand of 5 cards. These cards represent your freight
bills and the deck contains cards of the 4 different goods as well as
gas tank cards numbered 1 to 3. In order to pick up, lets say, two
corn, you must first be at a location that sells corn, and then you
must discard two corn cards from your hand. You draw back up to 5
cards at the end of your turn. Now, to sell the two corn goods,
you'll have to travel to a location that buys corn. Not all location
pay the same amount either. So, based on those random card placements
at the beginning of the game, you'll have to decide your best course
of action. Your opponents however, may have noticed what you're doing
and have moved to block your best choice. Once you decide you're at a
location you want to sell to, you'll need to discard 2 more corn
cards to sell them.

Once players start selling goods, locations will have multiple goods on
them. Any good on a location can be loaded, but if it's a good that's
not produced at that location, you must discard two freight bill
cards for every one good loaded. To move your truck, you can simply
pay from $1 to $3 to move from 1 to 3 spaces, or, if you hold any of
those gas tank cards, you can play them and move that many spaces for
free. (maximum of 3) And that, is The Great Heartland Hauling Company 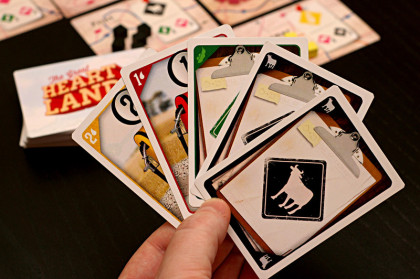 I'll say it again. It's a simple game. It plays fast, and that's what I
like about it. It's a filler. It's a game you can pull out when you
only have 30-40 minutes. It's accessible. My 8 year old and my wife
both have a great time with this game. It's fun, and for me, no
matter how heavy or light the game, that is the one thing a game must
be.

But, wait! I've only talked about the basic game. There are advanced rules
as well as a truck stop expansion (called an inspansion because in
come in the base game box) and a Borderlands expansion. All the
location cards are double sided. The goods that a location buys and
sells are the same, but one side of the card has some advanced
symbols. These symbols represent road blocks, toll roads, and weigh
stations. These all create added decisions you have to make when
deciding which direction to travel in. My favorite way to play is to
have some basic cards and some advanced cards in the map.

The truck stop expansion adds cards you can place on the outskirts of the
map. These locations are ones you can move to and for $5, they can
give you special upgrade benefits. These benefits are things such as
allowing you to stay on your current space, increase your hand size,
or move diagonally on the map. The badlands expansion is a small
expansion that adds two new location cards but more importantly,
pieces to add a fifth player. One top of the advanced play and the
expansions, there are a decent amount of rule variants included in
the rule book. 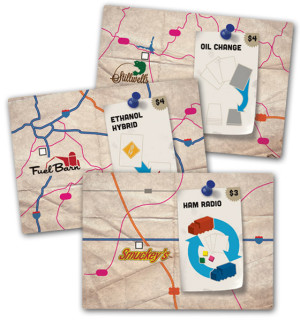 If you're looking to introduce a pick up and deliver game to a new or
younger gamer, I can't think of a more perfect game. You can start
out at the simplest level and gradually incorporate the variants and
expansions.