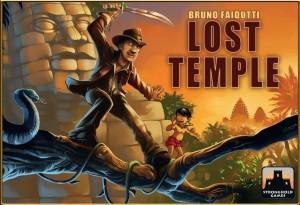 With only a pocket full of gems and a whole bunch of shear determination, I climbed from the cockpit of my Boeing Stearman and felt the soft sand beneath my feet. The small village of Bruno sat on the edge of the forest just ahead of me. I knew that if I was to reach the LOST TEMPLE of Faidutti, I would need to enlist the help of the villagers.

But of course, there's a catch. There's always a catch. Multiple fresh tracks lead out of the village and I knew instantly that I was not the only person trying to reach the LOST TEMPLE, but I did know I had to reach it first.
I searched first for the "Shaman". I knew he had the ability to to instantly transport me to the location of any of the others playing this game of finders keepers. The problem is, I have to name one of the village characters and hope he is out in the jungle already, far ahead. Unfortunately it is too hard to tell. Perhaps I shall take the village "Thief". He can help me find my way and can also steal gems from one of the other players. Of course,  like the Shaman, I had to name a character and hope he was with a player who holds many gems.
Along the way, there may be hazards that can cause me all sorts of troubles. Loss of gems, setbacks, heartburn. They can also help me by pushing me onward or even giving me gems. I think about taking along the "Seer". Not only can she help me find the way, she can predict the hazards and even move them around to my advantage.
I've heard stories of the local "Priest". They say that these priest know shortcuts through  the jungle that lead them to small temples. They come at a price however. I seem to remember that there is a small temple not very far from the village so I don't think the priest will help me right now. There is a local "Elder" who also will take payments to show you quick ways to get to the next village. I assume that he would be a good choice to help me seeing as how the next village must be quite a ways off.
Then I remember the stories of the thick jungle areas. These ares require machetes to hack you way past them quickly. I don't have one. The "Craftsman" can give me one if I ask for his aid.
I feel my precious gems in my pocket and remember two other villagers who require payment but can really help me find the LOST TEMPLE quickly. The "Scout". The more gems I pay him, the farther he will take me. Then there is the swift "Canoe"(man). He will require every gem I have but he will travel the back canals and find the quickest route of all.
It was then that I noticed how old the tracks were. Hours. A day perhaps. That's when I saw the "Child". I knew that he would know how far the last person had traveled, and that he would take me there quickly. He even had his own machete. I took his little hand, and we were off through the jungle, racing toward the LOST TEMPLE!

Lost temple is a game designed by Bruno Faidutti and published by White Goblin games and Stronghold Games. Yes, it is a race game. Yes, you are trying to be the first to reach the lost temple. And yes, you're enlisting the help of the locals.

At the beginning of each round the character cards are reshuffled and dealt out again. This process continues until one player reaches the final Lost Temple.

There are some other details about the game, but truly the fun, strategic, and cut throat play all lie in the character cards. Each round the cards are drafted, with the player in last place drafting first and then going clockwise. What this means, is that the first player will get to look at all the characters available to him this round, choose one, and pass the others. The next player will choose from those characters remaining, pass the rest, and so on. The game really takes on a "mind screw" persona as heavy metagaming, bluffing, and prophetic predictions become keys to victory. Although the best choice may almost always be right in front of you, the anger inducing Shaman and Thief characters are  first to act, and the player who picked them is always out to screw someone over. Choosing that Canoe with a ton of gems makes you a sure target for that thief, and there's always a risk of that Shaman, who acts first each round, to swap places with any player. So picking the obvious, best choice sets you up as an easy target.

This is absolutely a light game. But for such a light game with a limited amount of choices, it can actually get quite intense. And, it sure is amusing to take the Thief and call out the Canoe, stealing all of that players gems just before they were about to move about 15 spaces!

It's so close now. I can see the top of the LOST TEMPLE reaching up through the trees. I have managed to make my way past everyone. As I passed Mr.Red I saw the color fade from his eyes. As I stole all of Mrs. Meeple's gems I saw her hopes crushed. Now, with the LOST TEMPLE right in front of me, I just need to travel a tiny bit more. I glance over at my final guide. He's holding a machete but I wont need it, I just brought him along to fool the other weak minded players. As I start to venture forth, I hear a faint cry from somewhere deep, deep, back inside the jungle. I can barely make out the word, "Craftsman!"