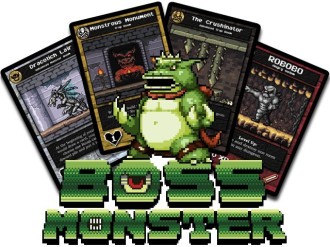 Boss monster is one of these games where this happens. You arrive at your local game night where one of your pals walks up to you and ask if you'd like to try this new game. you say sure what's the name? They say "Boss Monster" and you say that you've never heard of that one, which is odd for you because you're the type of person who keeps up on all the new releases and hotness going around. Then he says, oh it's a small card game that came out through Kickstarter. I just got my copy. Then you think to yourself, I really don't want to play that. – but you don't want to be rude so you say, sure why not, I'll try anything. Then the next day you find yourself ordering your very own copy.


Yes, Boss Monster is a card game that totes itself as a dungeon building game. But don't think that this is a play on deck building, because it's not. There's a deck of room cards and a deck of spell cards and these are the decks you'll  be drawing from. The object of Boss Monster is to build a 5 room dungeon to protect your boss monster card. At the same time, you'll  be trying to entice heroes that are drawn from a hero deck each round to come to your dungeon in hopes of killing them. When you kill enough heroes to acquire 10 sole stones, you with the game.  But you have to be careful because if you're luring heroes into a poorly built dungeon, they're going to make their way through and damage your boss monster. If you take five damage to your boss monster then you are out of the game. 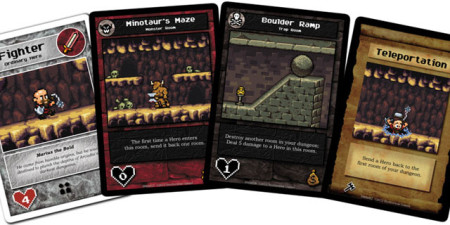 Boss Monster has a huge dramatic and graphical appeal. All the graphics on the cards are themed after old 8 bit side scrolling videogames. It's weird to say old but if you're in your mid to late thirties you'll be getting a nostalgic feeling of those old Super NES side scrolling games like Castlevania which is one of the main games this is modeled after. With the iPhone and Android and newer hand held gaming devices 8-bit games have still remained fairly popular. The artwork hasn't been ripped from any games, it is all original which is cool. There's some awesome throwbacks the things in there such as the "father brain" instead of the mother brain from Metroid. When you notice these things your just going to get a warm tingly feeling inside

Each player will have a hand of cards and each round a few heroes from the hero deck will be flipped face up. So you'll see the power of the heroes that are coming out this turn as well as what type. There are thieves, rogues, wizards, and fighters. Each turn every player will have a chance to play a room card and add it to their dungeon or upgrade a room that's already in their dungeon. There are two types of room cards: Monsters and Traps. The room cards have three important pieces of information on them. One, how much damage that room will do to the hero that goes through it. Two, what type of treasure is in that room. (which is important for luring in the heroes). Three, a special ability. The type of treasures indicated are associated with the type of the four heroes. The players that had the most of a particular type of treasure is going to lure in that type of hero. So for example, if a player has the most types of treasures that attracts fighters, he will attract all the fighter cards that are out in town right now face up. If there's a tie for the most of a treasure type, that type of hero just stays in town and waits until one player has more than another player of that type treasure.

The special abilities on the room cards is 50% of where the interaction and options of the game come into play.  The rooms may have an ability such as, "If this room is next to another monster room that monster room is +2 damage" or possibly it may say "if this is the first room in your dungeon it gets a bonus damage" or it may say "if I hero's killed in this room you may draw an extra room card or spell card" or may say "every time you build a room after this room draw another room card". So most of the room abilities activate when the room card comes in to play.  Also keep in mind you only have a maximum of five rooms that you can build. Another room that is pretty cool is a bottomless pit, which immediately kills any hero entering that room, but then you must destroy that room. The room cards also have an advanced room types and these advanced rooms can only be built over top of already existing rooms.  The room  you build it over top of has to contain the same type of treasure.  When you do get all five of your rooms built, your boss monster actually gets to level up and he usually has a one-time ability that happens when that occurs. After you've built the five rooms , remember, you can't go to six, so the only thing you can do is try to improve your rooms.

In the game, there are also spell cards. the spell cards are really where all the player interaction occurs because these are the ""take that" and " you didn't see that coming" cards. Spell cards will let you do a lot of things such deactivate a room in a dungeon or perhaps add three health to a hero that's about to go through someone else's dungeon or perhaps they will help you by adding three damage to one of your rooms or help you by bringing a hero to your dungeon that would otherwise go to someone else's dungeon. These cards can be tough to come by unless you can get some good room combinations that will let you keep drawing spell cards. Keep in mind that they're a hot commodity.

That really is just about the whole game of Boss Monster. There are regular heroes that are not quite as powerful they do one damage your boss monster and they're worth one soul stone, but as you get about halfway through the deck, the heroes that are going to start coming out are epic heroes. They do two damage if they make their way through and they're much stronger and also worth two soul stones. So also keep that in mind as well. If you're not doing anything to build your dungeon up fast enough before those epic heroes come out you'll be in a lot of trouble.

This game is easily expandable so I can see that it's going have a little bit longer shelf life than just have your average card game that comes out and doesn't get any support. I know that they've already got one expansion almost finished at this one is going to give your heroes items that they can equip to make them have an easier time to come through you dungeon but if you defeat them, then you can use these items against other players boss monsters.

So this game is going to appeal to anyone that has that nostalgic factor of the old 8-bit side scrolling action games especially Castlevania. It also will have a place with a group looking for light fun card game that does have some "take that" aspect to it, but it's not too much. For a $20-$25 price, this is going to be one of those hidden gem games. You at least need to track it down and give it a shot.