Happy New Year! We start off updating you with how Jeff "popped the question". We start our 2013 Support drive (see website) and we are giving away some incredable stuff. Speaking of give aways, we also have a new contest to win Arcanum from Elfinwerks. We dive into on of the most innovative fantasy co-op games, Fantasy Flight Games LEGENDS OF ANDOR. Also, we talk about a slew of new games including Legendary: The Marvel Comics deck builder, DC Deckbuilding game, Escape:Curse of the temple, and Love Letter. We finally have another movie review, The Hobbit.

A fantasy themed Co-Op with story telling aspects. It's a first design by famous boardgame artist Michael Mezel. Another fantastic production from Fantasy Flight games, but find out if this game with a highly over used theme can find its place. Spoiler: It's awesome!

OUT OF THE BOX:

Gandlof, Bilbo, and many other favorites return, as well as a host of new characters including a bunch of Dwarves! Directed, co-written and produced by Peter Jackson and based on J. R. R. Tolkien's 1937 fantasy novel, this is the first of three parts to one book. See what we think.

It's Christmas Time! What better way to bring holiday joy than to talk about the most joyous reason for the season ...  ZOMBIES! We take a look at two very different recent zombie games. Since we're in the festive spirit, we go into a discussion about Christmas horror movies! Also, Jeff's life is about to change forever, find out why?ï»¿

A zombie negotiation game whare the players are more of a threat than all the zombies! From Repos Production, find out what we think of this sequel to the hit game Mall of Horror by the same designer.ï»¿

A cooperative scenario driven zombie game that comes with 72 miniture figures! The production on this game is top notch, but does the shiney mean it's a good game? Listen and find out what we think.

OUT OF THE BOX

Af any genre can ruin the true meaning of Christmas is Horror! From Gremlins to Silent night, Deadly Night, we tell you which ones are worthy of a plate of cookies and which ones should be tossed out with the coal.

It's been over two months, find out what we've been up to. The Haunted Prison, Matt goes back to college, and Jeff moves into a new condo (and not alone)!﻿

We take an in depth "pros and cons" look at this re-imagined version of one of the best dungeon crawl games ever made. Does it stand up? ﻿

We give some thoughts on a bunch of new games!

Designer of Stronghold Games "Core Worlds" and it's new expansion!

Andrew explains Core Worlds and we talk about what makes it so great. Then He tells us all about the new expansion hitting this month, "GALACTIC ORDERS".

What's been on our radar outside the baord game wolrd!﻿ 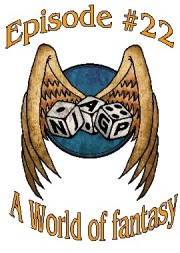 We interview the famous author of over 60 novels, including over 35 set in the Wizards of the Coast, Forgotten Realms setting, and the creator of the iconic Drow ranger, Drizzt Do'Urden!

While most of you traveled to Indianapolis this month, A couple of us traveled to Lancaster, Pa and the WBC! We talk about about what went on at the Lancaster Host hotel!

Out of the Box: We dive into our fantasy

Jim and Jeff discuss their favorites in the fantasy genre of movies, television, books, comics, video games, and computer games! 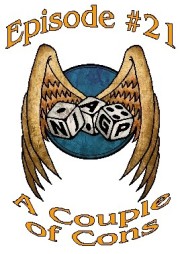 It's all about two wonderful conventions

tells you all about his weekend in Orlando!

Here's a list of just some of the games we talk about:

Mage Wars - Empires of the Void - All flesh must be Eaten RPG - Mutants and Masterminds RPG - Ninja:Legend of the Scorpian Clan - Wok Star - Pluckin' Pairs - Legend of the Lost Dutchman - Secret Fire RPG

Richard Launius (Arkham Horror and Defenders of the Realm designer)

- Ace Detective, Run fight or Die, and many more!

You gotta be quick to win this one!