Spartacus: A Game of Blood and Treachery

Maybe you have seen the Starz series Spartacus and heard about the board game. Perhaps you thought licensed games are never any good. Perhaps you have never seen the show and thought you would not be able to understand the game so didn't give the game any consideration. It could be both reasons that you never looked into the board game Spartacus.  Wrong! Wrong! Wrong! I'm going to tell you why.

Spartacus comes with a board that depicts a Roman gladiator arena.  Players choose one of the House Cards which has special abilities, starting assets, an area for gold, gladiators, slaves and your Influence (victory points) counter.   Each player will also get a number of Intrigue cards depending how much Influence is agreed upon at the start of the game.

The game is divided into three very different phases per turn: The Intrigue Phase, Market Phase, and the Arena Phase.  During the intrigue phase players will use cards from the intrigue deck. The Intrigue Deck consists of Scheme cards, Reaction cards and Guard cards.  Scheme cards are played to perform a variety of underhanded maneuvers on your opponents. Reaction cards are played in response to scheme cards many reaction cards can foil the scheme card played.  Guard cards can also be played down in front of you to try to stop a scheme targeted at you later in the game.  You must have the influence indicated on the card in order to play it. If you do not have the influence you can make deals with other players to gain the influence you need.  Being honest when making a deal is not mandatory.  Backstabing is a big part of this game.

The Market Phase begins with players trying to trade assets like gladiators, slaves or guards. This phase continues with an auction. In the auction, four cards from the market deck are placed face down. The market deck consists of assets including gladiators, slaves and equipment. Each card will be flipped over one of the time and an auction will take place with all players blind bidding a number of gold for each asset. At the end of the market phase, players will bid on being the host for the gladiator games. This is important because the host automatically gains one influence and also gets to decide life or death in the arena.

The Arena Phase is where gladiators will hold their bloody games. The game now switches to a battle on the arena board using miniature gladiators. The power of the gladiator is indicated by the number of the dice they get to role for attack, defense, and speed.  Gladiators can be equipped with weapons and armor attained in the market phase.  Gladiator figures are placed on the board and then the players maneuver their minis and determine fights by rolling the dice.  The battle system has a risk type mechanic for determining outcome. Also, before the gladiators start their fight, all players can bet on winner and if a gladiator will be decapitated or injured during the fight. 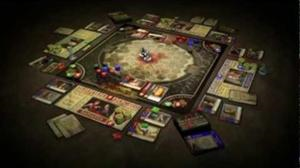 First, I love how this game has a bit of everything. It has a “take that” aspect to the card playing. In order to play cards that you may not have enough influence for, you will need to negotiate for that influence, which leads to a lot of backstabbing. Personally I love games where you don’t have to be honest and can backstab your opponent in the name of victory. In fact, the rules state that betrayal and undermining your opponent are part of the game, and it is encouraged.

Secondly, the Market Phase is where the game can be won or lost.  Do you buy that mighty Gladiator or that powerful weapon or do you save your gold so that you can become the Host?  I found this part of the game every intriguing.  Trying to figure out what your opponents are going for and how to go about getting the items you want is a lot of fun.

Lastly, the Arena Phase is where the game suddenly turns into a miniature battle game.  The system of losing dice when you take wounds and have less dice to roll as you get weaker gives combat a real feel.  The battles seem to always play out dramatically and  that leads to a lot of excitement around the table.  On top of that, the gambling on the battle adds a lot to the excitement as well.

I am truly impressed with this game.  I have not played a game that has this many different mechanics in it and yet it all flows together seamlessly.  Each phase brings different types of emotions and strategies.  The game has a high level of interaction between players.  I can say I love this game and cannot wait to get it back to the table. I look forward to becoming the most influential House in Capua again!!!