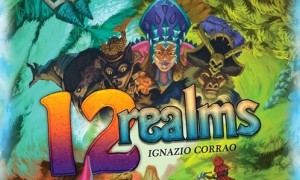 12 Realms is the first published game by designer Ignazio Corrao. It's published by Mage Company who is still a relatively small publisher but seem to be expanding their libarary fairly quickly. Successfully kick started, 12 realms is a beautiful game set in a fantasy world inhabited by all your favorite creatures and critters that we have all come to know, as well as some new ones.

It is a cooperative game for 1 to 6 players (with a variant for 1 player to be the “Dark Player”) in which everyone will be taking on the roles of heroes trying to defeat the Dark Lord of each realm. The heroes may also be familiar to you as players may assume the roles of Red Riding Hood, The Nutcracker, Siegfried, Snow White, and even a mouse version of Robin Hood. Each hero comes with a wonderfully crafted miniature. (some assembly required.) 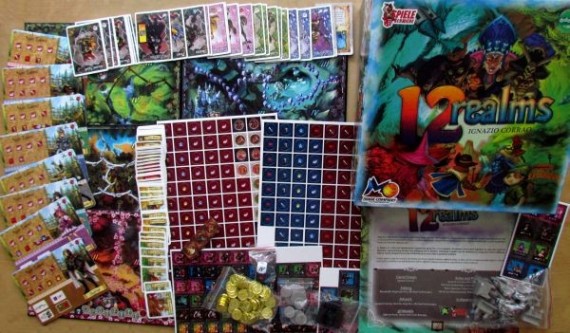 The game comes with boards, cards, and tokens representing 4 of the 12 realms. Player count and difficulty settings will determine how many realms you play with. As I said earlier, victory comes in the form of defeating the Dark Lord of each realm. This can only be accomplished by first collecting the 3 pieces of an artefact in each realm. (Yes, it is spelled artefact in the game on purpose.) The game is lost if any of the realm's dark Lord influence track reaches 20. This track moves 1 space for each creature tile in the realm at the start of each turn.

Each player will get a board of their hero character. Each hero receives, in tokens, a certain number and type of talents to match the ones shown on their hero board. These talents are spent (exhausted) during your turn to perform actions. Each talent is represented by a specific icon. Swiftness talent, for example, is a wing. Combat a sword, Magic a star, etc. Not every hero has every type of talent and they all have different quantities of them. Creature tokens will have 1 or more talent icon on them indicating which talent or talents the hero must exhaust in order to defeat the creature. Dark Lord require many talents to defeat.

Moving 1 space (or area) requires the hero to exhaust a swiftness token, as does going shopping in town. When shopping, 2 cards are drawn from a town deck and 1 of them can be purchased using gold. Gold is acquired by finding treasure, defeating certain creatures, or if your hero has gold talents. Going shopping is very important. Most card gives the hero a permanent new talent and many times a more powerful secondary ability if the card is discarded. The game also comes with 3 shops you can randomly place throughout the realms. These shops have a more focused selection and don't require you to spend a swiftness token to visit them. Adding these shops is just a personal choice and they increase or decrease the game difficulty. 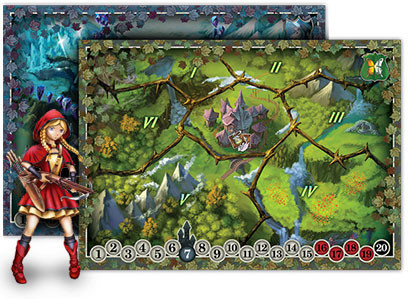 Another thing you can do on a turn is travel to another realm if you're in a town. However, once you do this, your turn ends immediately, even if you have talents remaining. Once a player has exhausted all their talents (you may not be able to use them all), their turn ends. Heroes who occupy the same space as another hero can “lend” their unused talents to the active hero. All hero talents are refreshed after all heroes have finished their turns.

The game comes with 4 Black Fortresses. They are another option that the players can add in for greater difficulty. When a Dark Lord's influence track hits 7, a fortress is randomly placed in that realm. Creatures will now spawn from that space and be 100 percent protected, until the fortress is destroyed. The variant for one player to play as the “Dark Player” means that this player will control the Dark Lords and creatures and also gets a hand of event cards to use. I have yet to play this way but I hope to soon.

12 realms is not without a few flaws and they come mainly in the rule book. Things could definitely be laid out a little clearer. That said, Mage Company has already put together a new rulebook you can download online and will come with all future printings of the game. There is a ton of iconography in the game, especially on the store and town cards. Once you get a little more familiar with it it will be a breeze but I suggest that you must get the new rule book for this reason, it list all the items, mounts, allies, etc and how exactly each one works. There is also a decent FAQ on their website. 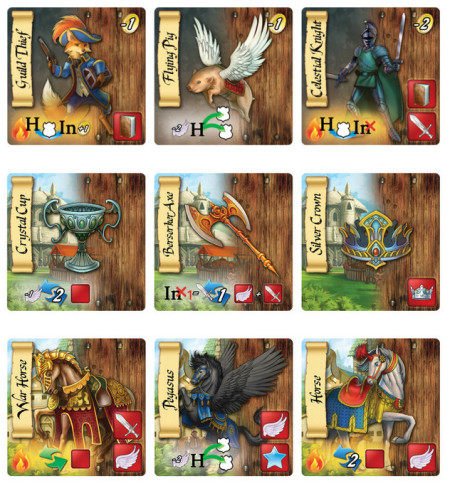 One of things that is done purposefully in 12 realms is that the balance is, well, not very balanced. Some heroes are much better than others. Some items are far better than others. (One item is ridiculously overpowered.) Some realms are tougher to navigate and have harder creatures. The designer and publishers have said that this is done on purpose because they wanted the game difficulty to be extremely customizable so that younger kids can play and feel they have a chance but also so that hardcore gamers can choose a set up that will really give them a challenge. However, this is another area not addressed much in the rules. There is a nice layout of which variants to use or not to use for specific difficulties but there are no suggestions on which heroes, realms, Dark Lords, etc to use. Once again however, Mage Company has stated that this is something they plan on doing very soon.

Don't let those last points of “soon if not already addressed” problems turn you away. 12 realms is a very fun and imaginative game! The talent system is something I've not really seen done before and it fits right in. It does lend a more “puzzle” like aspect to the game and I think that's good. (Anyone who has played Michael Menzels “Legends of Andor” will know right where I’m coming from.) This could of easily been a dice rolling system but I feel that it would've been lost in the hay stack if that were the case. If I didn't already say so, I really enjoy the artwork and design. From the samurai Cats and soldier Mice to the Dryads, Sprites and Pig Pirates, the creatures are whimsical, and refreshing. I look forward to the future of the game and can't wait to see what the new realms will have in store!