Heart of Cormyr & Sting of Lolth 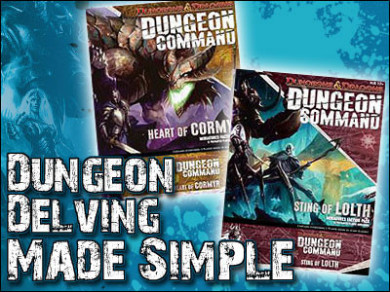 THIS GAME HAS NO DICE! There, I said it.

As you take the journey into Dungeon Command you need to go in without having misinterpretations of what the game is and what I believe Wizards of the Coast planned for it to be.

WoTC clearly pronounces that this is a "Tactical Skirmish Miniatures" game. Lets take a quick look at these words.

"Tactical" - related to "tactics"
An action or strategy carefully planned to achieve a specific end.
The art of disposing  forces in order of battle and of organizing operations, especially. during contact with an enemy.
Also Tactical - relating to small-scale actions serving a larger purpose

"Skirmish" - Noun
An episode of ... fighting, especially between small or outlying parts of armies or fleets.

I have nearly zero experience when it comes to miniatures combat. I bought into Confrontation a few years back and never played it. I bought into Malifaux about a year ago and only played in a quick demo game at a con. In fact, all of my experiences have been playing in miniatures games at conventions. (Well, I guess Heroscape is for all purposes a miniatues game.) All the experiences have been enjoyable, but there just has never been an interest within my local gaming groups for miniatures games.

Wait, are you still waiting for a review?

Dungeon Command delivers. That is what I say. It gives me exactly what I was hoping it would. It gives me that small level, militaristic combat game that was missing from my repertoire.

And tactical? That's the meat and bones. I'll give a brief description for those who have not read about it elsewhere.

Right now there are two separate faction boxes, or "warbands" for purchase, Sting of Lolith and Heart of Cormyr. Retail on these is $40 but can be found for as low as $27. 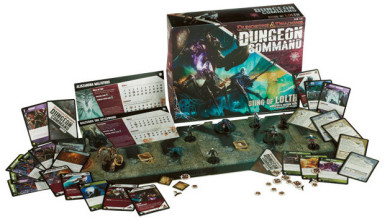 You'll really need to buy both (or I guess you could by two of the same) to play a full two player game. If you just purchase 1, it does come ready to play two players, you'll both just be playing with half of the warband.

In all my games I have played faction vs. faction and never with half and half. Each player will essentially be playing the Commander of their warband. Each set comes with two to choose from. The Commander will have two key stats; Moral and Leadership. Moral is essentially like you life points, when drained, you loose. Leadership determines the amount and quality of units you can have deployed on the battlefield. Your units have a level and the total number of levels deployed can not exceed your Leadership. Leadership increases by one each turn, allowing you to deploy more miniatures as the other ones die off or as the game progresses. (A)

Once deployed, on your turn you will activate all the units under your command one at a time. The units have a base speed and a basic attack/damage value. All units have a Melee (adjacent) basic attack and some units also have a ranged attack.

Each unit can move, make a standard action (basic attack or ordered attack), and perform a minor (ordered) action.

So what do I mean by saying "ordered" attack or action. Well, based on your Commander, you will have a set number of Order cards in your hand.

These cards are really the heart of the game. (B) There are a few different types but most are special attacks or interrupt (defense) cards. Not every unit can use every card though. The order cards also have levels and can only be used by units of the same or higher levels. Unless of course, you're assisting. (C)
Also, the order cards have attributes associated to the units as well such as INT(ellegance), STR(ength), DEX(terety), ect, and can only be used by units with matching attributes.

When you're on the defensive side, immediate action cards or "interrupts"
can be played.  Each unit must "Tap" (or exhaust) after using a defensive order or when dodging (D) so this makes them vulnerable.

Each time a unit is eliminated, the Commander loses Morale equal to the units Level. As I said earlier, the first Commander reach  zero Morale loses. As of now, the only way to gain Morale is by acquiring treasure that is placed throughout the map. (E)

(A) - Being able to deploy more units during the game is a fantastic mechanic. Where I am sure there are other miniature games that allow you to bring in reinforcements, this allows for more strategic planning than what's on the surface.
Some choices I had to face - Do I just put a smaller unit out to fill my maximum leadership amount or do I hold off a few turns to deploy a stronger unit? - Should I sacrifice a weak unit to be able to bring out a healthier perhaps more powerful unit? - Should I hold certain order cards for units that may benefit more from them?

(B) Firstly I am not the bit upset with the lack of dice. I feel the card mechanic is unique and can build tension as you never know what card your opponents have in hand. The element of luck is just as strong as with dice because as with ANY game of card drawing, you could get the perfect cards for the perfect time or get cards that don't quite fit with your plans. This to me adds another layer of strategy as you must plan according to your hands strengths as well as its weakness. If I'm not holding defense cards, I'm not storming out into battle with a weak unit.

WoTC has brought out fresh new look at the combat system for a miniatures game. I feel as if the game we're all about the dice, it would get too much of a comparison to other miniatures games as well as be too much like the D&D adventure style games. If You really want dice combat in a miniature game, it won't be hard to find. I love that they found a intuitive way around this mechanic.

(C) Assisting is an action that. An be found in the D&D RPG as well as many other RPG but in my experience is rarely used. It's incorporated here by allowing multiple adjacent units to combine their level totals and use a more powerful order card. This takes the action of each unit involved. The reason I like this mechanic is that it allows for even more tactics in planning your moves, and allows for greater flexibility in your deployment.  You're not forced to deploy your heavy hitters just to use your heavy hitting order cards. If you draw them and only have weaker units out, they can just gang up and reek some havoc.

(D) I really like the line of sight and dodging rule in this game.( More so than another game that just came out recently that has a fantasy dungeon theme and horrible los rules.)Basically you have to draw a line to each corner of the square your attacking and if any of those lines pass through a terrain or other units square, that target has partial cover.
It can "Dodge", avoid any ranged attack. But as I said, after dodging the unit is tapped and can not dodge again or use a defensive order card. There are many times when I question myself, should I dodge and leave myself open for another attack or is that the only attack being made against this unit. I'm always unsure because I like to leave my opponent unsure. Getting your opponent to Dodge or not Dodge at the opportune time can be huge.

(E) - picking up treasure is a valuable tactic, but, this waste the standard action of unit. Often I find myself retreating weakened units, trying to snag a treasure or two before being picked off, or waiting until I have a complementary Minor action Order card.

Cowering is a tactic in the game that allows you to lose Morale in place of taking damage.  Morale is precious, but there may be times when the benefit of leaving a unit out for another round of offensive combat is greater than the sacrifice of morale.

The game can be played by 3 or 4. I doubt I will ever play with 3, but team play could be a ton of fun. I'll add to this already long review if I ever get the chance to try 4 players.

Let me not forget to mention that Dungeon Command is customizable. Meaning that following a few simple rules, you can mix and match faction packs to create a customized warband. This is not in the rules (yet) but I can see doing some form of draft could be pretty cool also. If you want, you could even buy multiple of the same sets because the building rule is no more than 4 of the same card or figure. I do wonder If this means that some lunatic will by like 4 sets and have all level four creatures?

Personally I have never been one to customize games and I probably wont this one either. Much ;)
If you're looking for people talking about building their own warbands, their is plenty of talk about it on Board Game Geek in the Dungeon Command forums!

If it hasn't come through yet, positioning of your units is HUGE in the outcome of the game as well as in planning your short term strategies. This is clearly where WoTC is getting the term "Tactical". Every person I have played that has treated this game less like chess and more like checkers, has lost to me.

Are there flaws? Well, the packaging sucks. 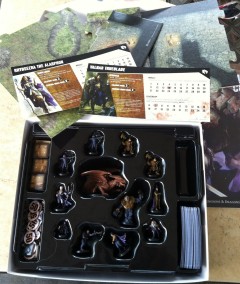 It looks nice upon first glance, everything fits nice and snug, but the cardboard is pretty flimsy, and if you are building your own warband these boxes are pretty much useless. Also, after sleeving the cards, they don't fit in anywhere except under the insert. The insert has three bowls for chits but  it doesn't keep them from splashing all around the box. I would have like to have seen a more sturdy box with an insert that could loosely hold the minis for at least more than one set. Anyone who is going to do tournament or competitive warband building games is going to need to buy
a separate storage box and will probably just trash the original packaging.

The miniature quality is on par with all other D&D miniatures. (except my war wizard did come without an arm)

If you own any of the three Of the D&D adventure board games, the Dungeon Command games cone with Monster and Ally cards to use its miniatures with those games. And these monsters are pretty darn tough ones.

So if it hasn't been apparent, to me, Dungeon Command is a keeper. It is one that I will easily try and push to the table. It fills a niche in my collection. Since the game virtually has no set up time, I also think it will help with the fact that other two player games, such as memoir '44, Battle Lore, and Heroscape, don't get played strictly do to their pre-game devotion of time. Go get it!﻿

Published - 2012 Wizards of the Coast