Not Just Another Deck Building Game 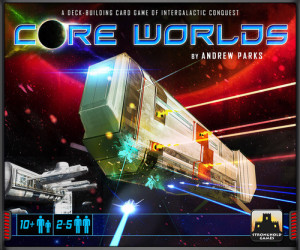 So I've played the game a few times myself but now it was time for me to teach it to a few new players.
I start taking the cards from the box.
I line up the Sector cards and Galactic cards then place the round marker.

I begin to describe how the game is played over 10 rounds in which we will be drafting unit and tactic cards and conquering worlds for energy. I explain how we'll be using 1 deck every two rounds and that the decks get increasingly more powerful cards in them and harder to conquer worlds, as we move further toward round 10. I Tell them how rounds 9 and 10 will contain the Core Worlds as well as some cards that will just supply Empire points at a high energy cost.

"Now, you probably want to know how you draft these cards." I tell them.

" Picture a triangle. At the top is energy. You start with some that is being generated from your home planet. You'll need to spend it to draft tactics and units into your decks. You will also need energy to Deploy units from your hand to your War zone and to play the tactics cards you've drafted. The third point of the triangle is the planets. You'll be using the units in your War zone to conquer planets. The planets, will in turn generate more energy."

After that brief description we go over what the different cards look like a what symbols mean what. This is where I talk about how the planets will show a fleet strength and / or ground strength number on them and that's at least how many of each you will need to conquer them.
"Yes." I answer.
"The units will show how much fleet and / or ground strength they provide."
I explain how once the units are used for an invasion, the go back into their decks to be later redeployed.

Finally, I tell them now that they know everything they can do, that each thing will cost an action.
"We each get a set number of actions per round as listed on the sector cards."
"Remember that playing tactics cards does cost the energy they require, but does not cost an action unless they state that they do."

At this point I ask if there are any questions about what I've said. To my surprise there are none.  In fact, one of the new players ( I'll call him Pear Face) says how simple it has been to learn. Pear Face says that he thought it was going to be much more complex than this.

With that, I randomly hand them their factions and we pick a start player.

"If you look at your starting decks," I tell them.
"You'll notice you start with some basic grunts and snub fighters. When you Conquer a world you can "tuck" one of these if it participated in the battle. This gets these weaker units out of your deck if you'd like but they still count toward final scoring."

The starting tactics cards are also self explanatory (some can add fleet strength to a battle, some ground strength, some let you acquire more energy).
"Each faction has one hero that is unique. Make sure to look at yours and read its ability. (again - self explanatory) Finally, put your starting planet in front of you, you'll see that it has an ability of its own. Some planets will. This one is the same for all of us and it lets you discard two cards during the Energy phase to give you more energy."

Now we shuffle, draw our hands, set our action and energy, and two of us play a tactics card that cost no energy to play but provides us with more energy.

Next I lay out the tableau of cards from the current Galactic deck in the center of the table. We spend a few moments describing what all the cards abilities are. Next, we begin the game.

Fast forward 3 hours.
(oh, that's not because the game took 3 hours, we ordered food that showed up halfway through.)

Yes, I won. But only by 1 Empire point, it was that close!

Looking over at Pear face I ask, "So, what do you think?" and this was his answer.

He smiled and said that he was right about one thing. That the game was simple to learn and that the rules were not complex at all. But he couldn't believe how deep and strategic the game play actually was. He felt the pressure from every single decision he made. He relished the intense management of his resources where he knew that to optimize his deck, this management ability was crucial. He said there were times he thought about splashing water in his face as he wanted to be so careful with every last precious action he had. AP? Yea, a bit. Especially being his first time. But it wasn't because he couldn't decide what to do, it was because he had such great options he couldn't decide what not to do. He wanted to draft every awesome unit card that came out. The robots, the Heroes, the powerful Cruisers. He wanted to conquer all the planets to boost his energy production, supply Empire points, and provide special abilities.

I look over at another one of the new players. I ask what her opinion is.

She tells us how she has played almost all the deck building games, and that some of the familiarities are here. Such as the fact that it's not all about just buying everything you can. You need to pay attention to what's going in your deck. It's even especially important in this game because of how the Core Worlds provide bonus points based on card types that are in your final deck. On the other end however, she says that this game felt less like a deck building game than any others she had played. The theme helped make it feel like I was actually building up and ordering an army rather than just a collection of cards that let me get more cards.

During all this talk, the final player had been placing all of his cards back in their respective piles, and my cards, and the other players cards. I knew there was another game he had brought and was probably eager to get to playing it. As I started to ask what his opinion of the game was I grabbed the box to put the game back in. As it turned out, he wasn't to happy with me. Nope, he didn't want me to put the game away. He didn't want to play the game he had brought. He had been setting Core Worlds back up to play again.

Turns out, we played two more times that night.