Delectable Nostalgia! But is that all? 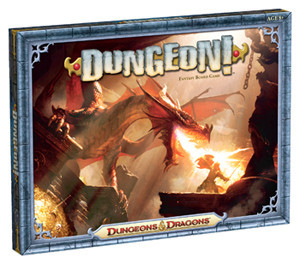 About two years ago, I went to Matts for the night to get some gaming in. We started out with a great game of BattleLore. Afterwards we decided to unwind and he pulled out this rat chewed, moldy box with the word Dungeon! on its cover. (just kidding, it wasn't in that bad of shape. But it was old!)

This was a game that had come out in 1977 that Matt played in his childhood. I didn't judge the book by it's cover and we played it. And I really had a good time. I won, but by one turn. I looked around for a copy of the game a few days afterwards and I couldn't find it.

It was about 6 months ago I caught word that Wizards of the coast was planning to reprint the game, and with a fantastic $25 price point, it was win - win!

I got the game and opened it up. And I saw why the game was so cheap. The components were missing I thought. But no, they were all there. The SMALLEST cards I have ever seen in a game!

If you have ever played the original, it also had small cards, and I don't own the original, but I still think these are smaller.

The artwork and graphic design has been revamped and it does look good.
The cardboard standees are OK but the cutouts for the base on some of them are wider than the cardboard so they fall off every time you pick it up. I just grabbed some minis from the D&D Adventure board game and used them instead.

One of the appeals of this game, is that younger kids can play it. So I was very excited to be able to play with my 8 year old daughter.

We set the game up and she went first. She moved into a room, flipped a creature card, and rolled the dice to try and defeat it. She did, so she flipped a treasure card and took it into her stash.

Then I went. I moved into a room, flipped a creature card, and rolled the dice to try and defeat it. I did, so I flipped a treasure card and took it into my stash.

If you're unfamiliar with the game, the board is essentially tunnels with rooms connected to them. The heroes start in the center of the board which is broken down (and color coded) into 6 areas that contain progressively more difficult monsters but wield progressively higher values treasure.

Depending on which character you choose, you will have to collect a set amount of treasure then make your way back to the starting area.

The more powerful characters must collect a higher amount of treasure which forces them to venture further into the harder areas of the dungeon. The super powerful wizard needs the most treasure.

Balance issues do not seem to be a problem. Every game I have played have been extremely close, with most, if not all, players collecting their set number of treasure around the same turn and it becoming a race to be the first one back.

One small issue I saw, was in a game with 4 players, they pretty much cleared out level 1 and 2 early on and it was difficult for the week rouge to fight the monsters in level 3.

Circling back, the simplicity of the game has its charm, but can also make the game start to feel a bit monotonous. The two tomes my daughter played, I had to do my best to spice up the game because she got a bit bored of the routine. Move - Flip - Roll - Move - Flip - Roll

If you fail a roll versus a monster, you just roll on a track. The counter attack is anything from a miss, to you dropping all your treasure in the room, going back to start, and *gulp loosing a turn. 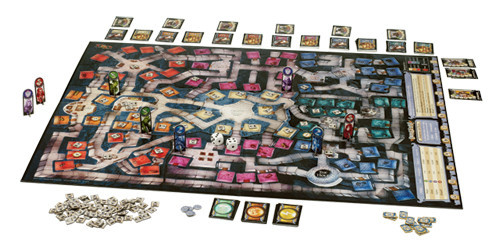 There is a handful of other things going on such as trap cards, equipment cards, and secret doors that require a die roll to find, but if this review has hammered one point to death, it is that the game is so elementary and repetitive that it can feel a bit boring at times. And in longer games, kids will definitely start getting fidgety.

But....I am glad to own this game. As I said, the price point is good. (although I would've paid more to get larger cards. Artscow anyone?)
It can be a good game night opener or closer as long as some or all of you group fits these categories:
1. They're younger kids
2. They like Dungeon crawls, Fantasy Themes, and/or Dungeons & Dragons
3. They played Dungeon! As a kid and have the nostalgia aspect

If you or your group doesn't fit these categories, roll a d6

1 : You'll Hate This game with a passion. You'd have more fun staring into the sun until Your eyes bleed.
2: This game is not for you, or for your game group, or for your friends, or for your dog.
3: You may like this game, but probably will need to be intoxicated to really enjoy yourself.
4: This is a game you will like much better than a game you don't like.
5. You will be overjoyed and perplexed at how much you like this game.
6: You will love this game so much you will probably want to buy a copy to give  to all the people you are friends with. (so seven)