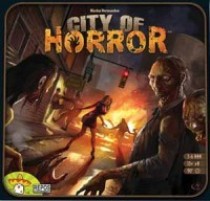 If you know nothing about City of Horror, the above scenario can and (almost) did happen.

Repos Production says it best themselves ... "City of Horror is a backstabbing survival-horror game!" (About zombies)

As in all my reviews, I'm not giving a breakdown of components or a "how to play" overview. If you're looking for that go check out The Dice Tower video or grab the rulebook from Repo's website.

CoH, again I say, Is a zombie game.

But is it? Wait, now I'm second guessing myself?

This game does one important thing not many other zombie games have done, it makes me feel like I'm actually doing what I might me doing, if zombies really existed. Yes, there's still some "game mechanics" that have to be here to make it a "game", but they don't completely break the thematic overture which is, in short, try to survive. Your victory in this game has nothing to do with the number of zombies you kill, in fact, you may never kill a one, but it has everything to to do with how well you can manipulate and judge the players of the game.

You start the game with a group of  mismatched survivors and some cards that are more valuable than almost anything else in the game. Remember that!

Another important aspect is that on your turn, you're only going to be able to move one character, so where you are in the turn order is pretty huge.

And this is where the wheeling a dealing starts. Only the players on the water tower space know where the next wave of zombies and supplies are headed, and they don't have to tell anyone.

If you have no interest in diplomatic games involving voting, making and breaking deals, bribing for information, and straight up back stabbing, stay away!

Every location on the board (except the crossroads) has the chance to require two separate sets of voting each round. A vote on which player present gets the supplies there, and a vote on which player gets eaten. So a lot of time is spent negotiating with each other in these situations. Having a majority in voting can be essential. But if you have any inclination that  you will end up being on the wrong side if a deal, or zombie food, this is where the cards are huge! They can be played anytime "except" just after a vote (so don't wait too long to make your move) and, they can have drastic effects.

The key to survival is out maneuvering, out planning, out thinking, and out and out treachery! You will not make new friends playing this game. You may loose some.

Blind siding people is a key ability. hiding your strategy is another.

All this fits together nicely for me and makes for a negotiation game with swings and loyalty changes more than any other I have played.

Most of the negatives I have with the game are going to be very situational. You could play with some people who just hate this sort of game or those who just can't seem to grasp that "it is just a game" and will get upset at what happens to them.

You may get into a situation where two or three players team up and make it difficult for the others. Now, teaming up can be in the spirit of the game, but I'm talking about a group of friends, or a couple, that refuses to compete against each other and will only vote against the other players and always with themselves, even when it makes no sense to do so.

You should also know that CoH is a language independent game, which means that all the character abilities, item cards, and locations use only icons. And there are a lot of different ones. Sure, after a few plays you'll have them all down, but for the first couple of times you will constantly be passing a rather large rule book and reference sheet around.

The game has some desent replay ability with each location having two different sides on the tiles and the random placement of the 4 corner locations can change up gameplay as well.

Speaking if the tiles, this brings me to the biggest problem with City of Horror. The boards warp!

When the game was released at gen con 2012, the company decided to not even sell the game. A few people did receive copies for review and in their reviews said that the problem was being fixed. Well, it obviously wasn't. There are countless numbers of people complaining about the quality if their boards in the game.

If you're reading this review on Board game geek, go see more on this topic here..

The boards that came in more game which I purchased from my FLGS are the most warped boards I have ever seen in a game. Upon writing Repos they responded their was nothing they could do. (Again see link) 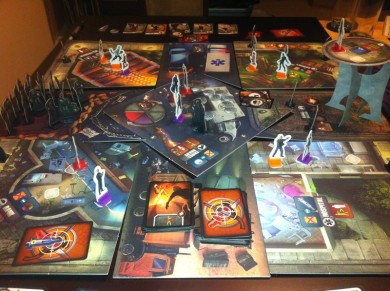 A pic of my warped boards