I have played this game several times now and I must say, I still have no idea what the heck the theme of it is supposed to be. I know it has something to do with gem mining, but since the gems are just pictures on on these incredibly hefty poker chips, I forget they're gems at all. Also, the pictures on the cards don't remind me of the them either. There's a card with elephant butts and lots of cards with buildings, locations, and people staring at things. (The artwork is nice though.) Everyone who plays this just says “chips” when taking the gems. Yup, you could take all the artwork off the cards and chips, leaving only colored chips and cards with symbols on them. And you now what, I'd still play this game!

There are 6 colors of chips: red, green, blue, black, white, and yellow (which is wild). On your turn you can either take 1 chip of 3 different colors or 2 chips of the same color provided that there are 4 chips of that color available before you take them. (example, only 3 whit chips left, you can't take 2.)

There are also 3 tiers of cards, arranged in 3 rows of 5. (With the cheaper tier cards on the bottom and the more expensive tier cards on the top). Another thing you can do on your turn is acquire a card. Each card has a acquire cost in chips. (Ok, I'll start saying gems!) For example, a low tier card may cost 2 green, 2 blue, and a black gem to acquire. A top tier card may cost 6 white, 6 red, and 3 black gems to acquire.

Some cards you acquire may give you a victory point (or 5). The object of the game is after all to get to 15 victory points. But also, each card you acquire goes in front of you and will give you 1 permanent gem of a specific color. So, as you build up your card collection, the less actually chips (I mean gems) you'll have to take to acquire cards. A final action is to reserve a card. You simply set this card off to the side to acquire later and also take 1 wild gem. (See, I said gem!) 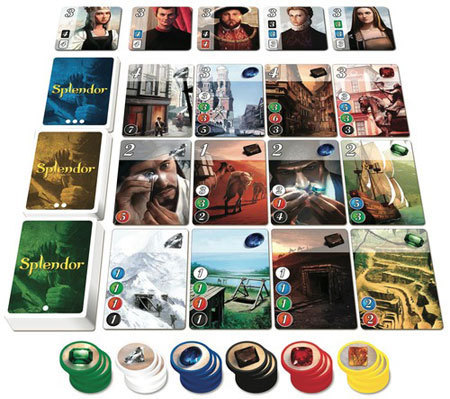 It's not that you shouldn't have a plan though. It's important to look ahead at the available cards as well as the requirements of the nobles. It's also important to pay close attention to what the other players are doing and try and make sure they're not going to “snipe” you. (Grab something right before you do.) And it's really important to not ignore those lower victory point cards, especially if you can snag them at a cheap price. (Nothing is cheaper than free!)

Splendor was a nominee for Germany's Spiel Des Jahres award. (Family Game of The Year) Although it didn't win, (I truly think the theme disconnect is one of the main reasons) being just one of three nominees for this award says a lot for the game. It is definitely a good fit for a family game night. It is definitely a good fit for a quick filler, and it is definitely a good fit for a game to introduce to non gamers. The mechanics are simple enough to jump right in but if you want, you can also put on your thinking cap and plan strategically. (Whoa! Don't be too thinky though, there is a huge randomness in this game! Sometimes a new card may just flip out that is just perfect for the taking for the next player and sometimes, just when you need one more green card for a noble, not a one will come out.) Splendor is just Splen.......no, I'm not going there!