A TOUCH OF EVIL 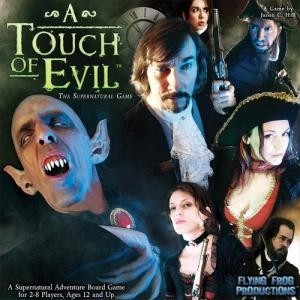 I have enjoyed A Touch of Evil  very much over the years since I first  purchased it. This review below is the  first board game review I have ever written.  I was new to this board game hobby and I found this cool looking horror game on the shelves of my FLGS .  I anguishly  drove it home ran upstairs and  opened the box.  I immediately was amazed by what I found inside, the components were great .  Then read the rules and played the game as soon as I could, from the first play I knew this game was for me.   I have now played this wonderful game more than 20 times and still will never turn down an opportunity to get it to the table.

First let’s go inside the box.  The components in the game are outstanding.  The player sheets are thick cardboard  and have a high gloss on them, in fact all of the tokens that come in the game have a high gloss and seem like they will last a long time even with a lot of play. The game board is a bit small, but with expansions connecting more boards I can see why they did this.  The board looks great, it has an old world map feel to and all the text on it is easy to read.  The mini’s for the Heroes are hard paint-able plastic and have a good bit of detail. The cards have real photos of people in costume.  I  think they look great.  Whether you like this game or not I can’t see anyone having a problem with the components.

The game is for 2 to 8 players but can be played solo and with the expansions the game can go beyond 8 players(though I would not suggest it). Each player takes the role of a Hero hunting down a   Supernatural Villain.  Villains in the game are the Vampire, Werewolf, The Spectral Horseman(headless horseman) and The Scarecrow.  The game can be played competitively but it is really set up to be played cooperatively and that is what I will cover here. 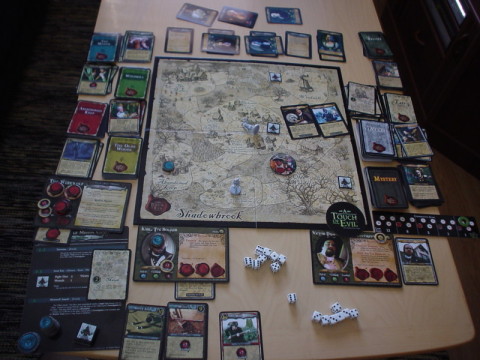 Heroes win by defeating the villain before the Shadow Track moves to darkness.  You can also lose if all players are KO’d at the same time.  Heroes do not die in this game they get KO’d when they have used up are there wound markers.  The Shadow Track keeps track of how much control the villain has over the town and also indicates how hard it is to find the villain’s lair.  The stronger the villain the easier it is to find him.  The track is not a turn counter but can move by actions that will happen during the Mystery Phase(the bad guy’s turn).

The players collect investigation markers that are used for buying Town Items and have various other uses in the game.  Player receive wound markers to keep track of their health.  Each Hero has a couple of special abilities.  The players roll a die to see how far they can move in that turn.  When rolling a one you get to draw a free event card . Landing on a named space the player performs an action associated with that space ie.draw the corresponding card that goes with that space.  Some spaces allow   you to draw an Event card and maybe perform a skill check to beef up your skills.  The four corner spaces each have a card deck to draw from.(The Manor, The Windmill, The Old Keep and The Old Woods).  Players continue to build up there hero’s power for the final Showdown with the Villain.  The Villain also gets a turn every round  called the Mystery Phase.  During this phase there will be a die roll with results on a mystery phase chart.  Then a Mystery Card is drawn and the card is resolved.  These card are often very bad for the good guy’s.

There is more that happens in the game ,for example the villain send out his minions on the board to wreak havoc on the heros.  And an interesting part of the game is the Town Elders which sometimes can help you and sometimes will turn evil and help the villain.  The game continues until the heroes defeat the villain in the Showdown or lose when the villain takes control of the town and it falls into darkness.

As far as my opinion of the game goes, I love the game.  For me the game is great.  As a huge horror fan the game has the feel of a horror movie, Sleepy Hollow comes to mind.   The game looks great, plays great and is a lot of fun.  The game has a lot of repeatability with 8 different heroes and 4 villains and the expansions add more heroes and villains I do not see myself getting bored with this game anytime soon!  Did I mention that it comes with a soundtrack? While not essential to the gameplay it is nice to have on in the background to enhance the mood of the game.﻿﻿﻿﻿ 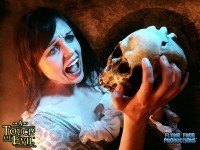