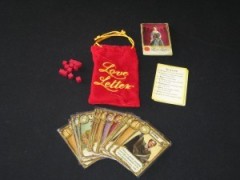 It takes 2 minutes to teach Love Letter to new players.

It takes 2 minutes to play a practice round of Love Letter.

It takes 2 minutes for a new player to understand Love Letter.

It takes 2 minutes to fall in love with Love Letter.

16 cards are all that make this game what it is. There are 4 player aids that come in handy for your first dozen rounds or so. There's also some small red cubes. 1 gets awarded to the winner of each round and the number of players determines how many of these are needed to win.

The rules are thus: You get dealt 1 card. On your turn you draw 1 card, and then you discard one of the two cards activating it's text effect.

The cards are numbered from 1 to 8. If all the cards are drawn, the player with the highest numbered card in hand wins. (But it rarely gets to that.) The game winner is a set number of rounds determined by player count.

The text effects on the cards (or the cards ability) may cause players to discard the only card, removing them from the round. In this case, the last player remaining is the winner. 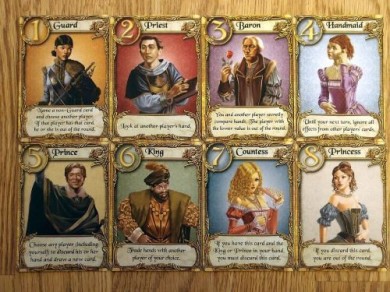 Here is the card breakdown.

(2) 2 Priest - let you look at another players hand

(3) 2 Barons - compare hands with one other player, lowest number is out

You can see from this list that it is imperative to your game play to deduce which card the other players hold.  But how will you know what card other players hold? That's the beauty of the game.  It will either be from very clever deductive reasoning, or shear luck.

As I talk about the cards I'll also through in some of my strategy thoughts.Guards - when you have to discard a guard early, It's really just a guess. You can help your odds by guessing one of the characters who has two copies and possibly guessing one that you're not holding, but that can be a sign that tells you're not holding that card either.

Guards - they are more powerful when discarded later in the round. You have no choice but to discard a guard if You have another guard or you have the Princess. You should never play the Baron or the King when you have a guard as both are sure fire ways of being knocked out of the round.

Priest - priest are fun. knowing what another player holds for certain is a huge benefit, especially if they're holding the princess. Also, this makes players discard a card they may normally wish not to because holding onto a known card is very risky.

Baron - One of my favorite cards. A baron with the Princess is a sure fire win but if there is more than one other player remaining you may get caught in a trap. If they have the countess it's a sure fire give away and the higher their card the larger your target becomes.

Handmaid - boring card. I almost always discard the handmaid as soon as I get it. It's a guarantee to remain in the game for 1 more turn. The only real reason not to discard it is if it's late in the game and your other card is lower in value.

Prince - this is a strange card. It's a great card if you know who holds the princess. It's okay if someone holds a king or countess too. Other than that, the benefit is a coin toss. You may use it on yourself if you don't like your card. Since there's only 3 other cards higher, using a Baron while holding a prince has good odds, but not great ones. Plus the prince has the negative countess interaction (see king)

King - my least favorite card. First, the King (as well as the prince) force you to discard the Countess if you have her. This is a negative thing because it can tip your hold card off easily. This Kings card effect is also a good one but it comes by sacrificing the high number of the King. I feel it is the most tricky card to use.

Countess - This is the "caught between a rock & a hard place" card.  Her high point value makes her look attractive but at the price of drawing a Prince, King, or princess and having to discard the Countess puts a large target on your back. I'm often torn between holding on the her or dumping her early on. Drawing the Prince, King, or Princess and the Countess very early in the game is one of the worst combos to get. 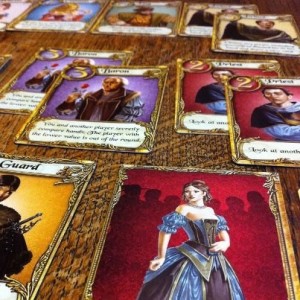 If it's not already apparent, I adore this game. It's the perfect take anywhere play anywhere game. It's great with 2,3, and 4 players. And since a round only last 30 seconds, you're not sitting around very long. My 8 year old daughter has quickly decided that this is her favorite game. She has even tried to teach it to her friends. (Who look at her and go, "Can we just play Sorry! now?")

Yes, this main game play here is deduction, but more importantly may be the game of reading the other players. Think of it as a themed version of Texas Hold-em. Sometimes, you get card combinations that play themselves, but it's knowing that will happen and then knowing how to handle yourself that creates the fun.

I'm sure other companies will soon jump on the popularity of this simple and elegant design and perhaps even design something that's better, but for now, this game has my heart.