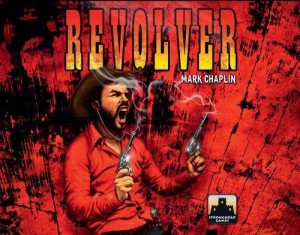 2 player games hit my table about as much as vegetables do, every so often.  With owning quite a few two players titles, the chance of them all being played even once a year is very slim.

I have avoided some really great two player games recently for this reason alone.

So along comes another two player game, Revolver. I'm going to be honest here, If Revolver were put out by any other company other than Stronghold games, I probably would not have picked it up. Stronghold was offering a fantastic pre-order deal on two of their games including Revolver and Lost Temple. They have a great track record so far, and I am friends with the owner. He supports NJAGP and I want to support Stronghold. So I pre-ordered Revolver along with Lost Temple. But, I wasn't all that excited to play it.

Last week, Matt came over, my wife was ill and in bed, Jeff was busy painting his new condo, and my kids were off doing their own things so it was a rare two player night. We first pulled out Lord of the Rings LCG from Fantasy Flight. (One of my favorite games from 2011) Afterwards, we decided to try Revolver.

This game is now in the top three of my favorite two player only games. Here's why.

Firstly, the theme really resonates. I've played other Wild West themed games but none of them makes me feel as engrossed as this does.
Next, the ease of play is very welcoming. Most cards only have 1 or  2 symbols and if the card has any text its very short and simple to understand. This leads to the fact that although it is so simple to teach and play, there are plenty of tough choices to make throughout. The right card draw at the right times can be critical to your success or failure, but picking your battles and managing your hand can be just as important.

One player plays the "Colty Gang" trying to escape out of town on the 3:15 Express or sneak into Mexico (those are both win conditions - one or the other). This player has his own deck of cards and placed out in front of him is all the Gang members. This gang member are numbered from 0 to 5 (with Jack Colty himself being the lone 5). As the gang members are killed off, the lower numbered members bite the bullet first. Many of them have a "when killed" effect on their cards. In order to escape, the gang will have to fight its way through 6 different locations. Each one is depicted on a card and placed in a line  between the two players and a set number of rounds (shown on the location cards) is fought at each location.
The second player is playing the Marshall's whose  path to victory is to kill either Colty's right hand man Chavez before the gang reaches the train, or to kill Jack "The Crow" himself before the train reaches its final destination or he escapes to Mexico.

Each player will pretty much being playing two types of cards on their turn. One type is Immediate action cards that do things such as "kill a bandit or lawman", "draw cards", "retrieve cards from your deck or discard piles", and various other things. The other type od cards are cards with a power rating that get placed at the locations. (Colty player has a three card per location maximum, the lawmen have no limit) At the end of each round, if the lawmens power beats the gangs power at that location, a bandit is killed. If not, a token is removed from the Mexican border card.

There are some other aspects to the game of course but I think that will give you a good overall impression.

To reiterate, the game is fast to learn, quick to play, strategic, very thematic, and best of all fun.

Also, the game is very well balanced. I have played it quite a bit now and while I have seen one or two lopsided victories, it usually comes down to a nail bitter and most of my games have come down to the very last round.

I really can't find any negatives with this game. Future expansions have already been announced that insure greater replay ability, customization, and variety. I would love to see Mark Chaplin somehow develop a solitaire variant. Here's to the future of Revolver and to an already fantastic game!﻿