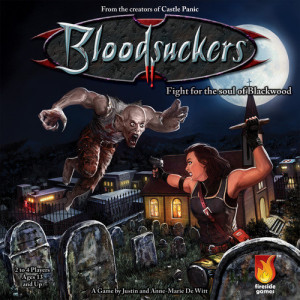 Bloodsuckers is a game by Justin and Anne-Marie De Witt of Fireside Games, the creators of Castle Panic. It is for two to four players. As the box states you are fighting for the soul of Blackwood the fictional town the game is set in.

In the game you take the role of blood sucking vampires or brave vampire hunters. The objective for each side is to take control of the most locations in the town. The town has five locations, the church, graveyard, nightclub, police station and the hospital. Each town location has a number of innocent citizens known as “Bystanders”. To win a location each side fights for control of the Bystanders. At the end of a battle the player who controls the most Bystanders wins the location for the town.

The game comes with a very nice stand up board that is used to keep track of turns, time of day and who won each location. The board also tells you how many Bystanders are in each location to fight over.
It also comes with a guide mat to keep track of what is going on during battles.
51 Hunter cards (used to battle vamps)
51 Vampire cards (used to battle hunters)
32 Character cards (these are your hunters or vampires or the bystanders you are fighting over),
20 Action tokens (used to keep track of actions spent)
10 Hunter and 10 vampire attack counters (use to keep track of attack values during battles)
6 Blood tokens (played to increase attack powers of the vamps)
6 Adrenaline tokens (played by hunters to gain additional actions)
4 Turn cards (reminders of what to do on your turn)
Rule book (like I need to say that)

After players decide to play Vampires or Hunters play begins with a die roll to determine who goes first and gets to choose what town location will be the first battle. The player that chose a location gets to go first and last playing cards in that battle. Bystanders are now placed in columns to be fought over. Each side now places his or her character cards in the columns to fight for the bystanders.

The starting player takes the first turn as shown on the clock dial on the board. The player gets to perform 3 actions most of which will be used playing cards. There are four kinds of cards. Attack Cards (yellow) are most common and have an attack value on them, players place attack counters on matching spaces on the bystanders they are fighting over. (Example: a card with an attack value of 3, a counter will be placed on the 3 space of the bystander card) Also many of these cards had other effects that may or may not take place. Impact Cards (purple) are used to modify attack values, draw cards and more. Strike Cards (red) are used to destroy characters from play along with their attack values. Dodge Cards (blue) are only used to defend Strike cards. After the clock dial goes all the way around, one full day, the battle is over and the player with the most controlled bystanders wins that location and turns the dial to indicate the winner. If it is tied the dial goes to locked indicating the tie at that location. Now the player with the least locations controlled gets to choose. The game continues like this until all locations of town have been fought over. The player who won the most locations wins the game. Of course there is a little more to it than that but that is the basics of game play.

Now for my thoughts on the game, most of the components of the game are excellent especially the standup board. All the dials are metal riveted on and it is made of thick cardboard, nice art; I love this piece of the game. The card and counters are well made also. The guide mat for the battles leaves something to be desired because it is made of thin card stock and you will have some trouble keeping it flat. This does not really hurt game play though. Though a number of plays now I am enjoying this game greatly. Each battle has plenty of “take that” and just when you thought you had your opponent beat they play a card that is equally devastating. I will say that is a medium light game that is not for everyone. If you don’t like luck and only love super strategy games this is not for you. This game like Castle Panic is a great family friendly game. The only problem I have found with this game is it is such a HUGE advantage to get to choose a location because you get to go last and that player has a great chance of winning at location. Hard core gamers will probably have an issue with that.

Over all I am very happy with this game and I don’t see that changing anytime soon. Take it for what it is, a light fun game of staking vamps and biting hunters you will have fun with this game too.