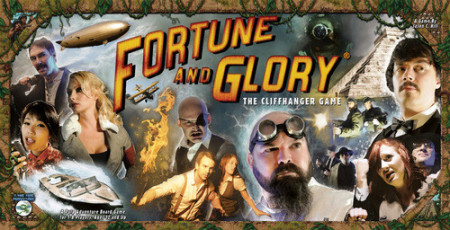 The reviews were out there. There were videos to watch. Months had gone by and this huge game had skepticism written all over it. Such a high price tag! Rules questions appearing on page after page in the forums on BGG. Then, it finally happened. That one thing that can make an as of yet undecided mind up. A sale. Then, the icing on the cake, I didn't buy it! A friend did. I just played it. And this, is what I thought!

Let's get the biggest fear factor out of the way. These rules are not so bad! Sure, there's no index. And questions where the answers were not memorized from a single rule book read through will crop up. There are over 200 cards. Each can add a twist and turn to the game and indubitably a few "so how does this work again?" moments. Yes, there may even be a few choice predicaments that are unexplained in the rules. Like what happens to a sidekick card when drawn and you already have one (the game limits you to one) do you discard and draw again? Discard and do not draw again, leaving you out of that much earned 5 fortune , or either of the two and re-shuffle that drawn sidekick back into the deck?

But mostly, rules answers will be overlooked and just needed to be looked back up. I guarantee during your first play you will mess up something and it will not be at the fault of Flying Frogs rule but at your own reluctance to engrave each and every sentence into your memory.

So what is a sign of a good game? How about this one. You sit there for an hour after the game has ended reminiscing about all those crazy times in the game where that. Beloved artifact slipped through your clutches. Talking about how you blew through the Nazi horde on a traveling Zeppelin and snuck off with coveted glory! Speaking of those times when just as you were about to claim the ring of Medusa, another player in the game caused the temple to come crashing down around you.

What's another sign of a good game? How about after the night is over, you fanatically try to schedule another date to become a traveling adventurer an test your combat against cultist, your agility in a bi-plane race, you lore at solving an ancient hieroglyphic puzzle, or you cunning as you infiltrate a secret base. That's right. You can't wait to play this one again. To Become a different character in this pulp world where fantasy and fantasies await.

Any game that has me breaking into my collection of special and lucky dice to use on that critical roll on a cliffhanger where only a 6 will suffice or else I will set off the alarm and be forced into combat with two Nazi soldiers, is a sign of a good game.

Sure, I can drool over awesome components anytime, but what really starts my saliva pooling is a frantic race back to my home city with two other players doing the same. We all have enough Glory to become the most famed exploring ever to live if only I had one more turn! One perfect event card that could stop my opponents in their tracks. I'm on the edge of my seat. Spoiled! One of my competitors has stopped my travels at sea, and now there's nothing for me to do, except recommend this game to those who fancy theme, excitement, fun, and a damn good game.