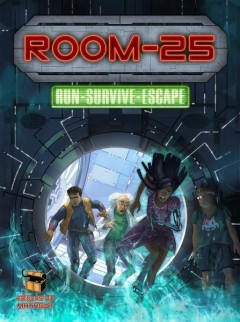 You’re in the future.  Your pulse is racing; beads of sweat are one your forehead.  The thoughts going thoughts your head are of “How will I survive this day?”  You are trapped in a room with a hand full of complete strangers.   Some of them have the same goal as you, to find a way out of the complex.

Some are there just to make sure you die.  The catch is, you must all escape together, not be killed by the disguised guards, not be killed by the trapped rooms, find Room 25 (the room that leads to freedom) and get out before time runs out or die.  Who do you trust?  How will you survive?  Millions of people are watching you on TV.  This sick game you are forced into is for the enjoyment people sitting on their couches wanting to see your demise.

Room 25 is a game that has several game modes, cooperation, competition, teams, solo and suspicion (with a traitor) which is what I will talk about in this review.   All modes have different requirement for the amount of players needed in the game, anywhere from 1 to 6 players.

The game comes with 32 room tiles, 6 character sheets (each with an explanation of all the different types of rooms in the game).  6 sculpted character miniatures, turn order markers for each players, a small board to keep track of the amount of turns in the game and 4 action tokens per player. 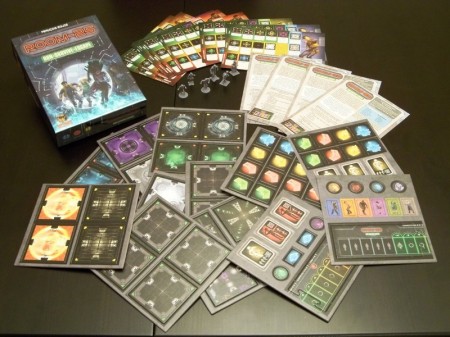 No matter what mode you are playing with game set up is generally the same.  You will use 25 or the 32 tiles to create the complex.  The Central Room, Room 25 and “The Vision Room” are always used.  The Central room is placed in the center of the table and all other rooms are placed around it, face down. This forms a 5x5 room square complex. There are many different rooms, some will slow you down, some trap you and you must escape or be killed others will kill you out right.

The game is played in three phases each turn:

Programing Phase: Each player chooses two actions out of four possible choices.  Action token are placed faced down on their character sheet on the corresponding spot for action 1 and action 2.  The actions are

Look: choose an adjacent room and secretly look at the tile and place it back face down.

Move:  move your character to an adjacent room.  It the room is hidden revel it.  In any case apply the effects of the room immediately.

Push:  Move a player in the same space as you to an adjacent room and apply the effects.

Control:  Move the line of rooms that includes you characters in the direction of your choice.  The room on the end will then move back to the other side taking the space of the last room that moved.

Countdown Phase:  Players take action tokens bake into their hands.  Then the turn order track moves down one.  The first player now will become the last player for the next  round.  This also acts as a turn track. Depending on what mode you are playing in the game is played in 8 or 10 rounds.

For players to win they must get to room 25 and use a control action to move the room out of the complex.

So what is it I think of Room 25?  Well when I first opened the box and read the rules, I was thinking “I’m not sure about this one.”   Then I played a solo game so that I could try it before teaching it.  I quickly found myself in a tough spot with no way out and was killed.  Even though I lost quickly it really increased my interest to play in suspicion mode.  Then we played the game with the traitor.  From the start of the game we all were having fun.  Everyone suspicions of each other, no one wants to be pushed into a room for a quick death.  It was very intriguing trying to figure out how to work together to find room 25 and get out but at the same time you can’t trust anyone, especially early in the game.  The prisoners fell short and could not escape in time and that lead to a win for the guards.  We all had so much fun we then played it again a second time right away.  I give Room 25 a thumbs up.  I can’t wait to get it to the table again.  I believe there is plenty of room for expansion, new rooms, new action choices and perhaps new game modes.  This is a game that will stay in my collection.  Give Room 25 a try!