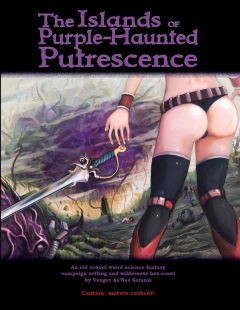 "You see a huge shimmering, liquid like, paper thin square mass moving quickly toward you. Looking through it, the landscape in the background appears wavy like looking far off on a hot day" A player at the table asks “Do you mean like Saran wrap? "Exactly I say, in fact the creature in the book is called Iridescent Cellophane." "Interesting, I like it" states the player. "Yes it is, it is one of the many strange and interesting creatures on the Islands of the Haunted Purple Putrescence” I reply.

That, my friendly reader, is a tiny part of a one-shot I came up with using Dungeon Crawl Classics rules and The Purple as a guide to the story.

The Islands of Purple Haunted Putrescence is a mapped out hex grid old school RPG campaign book. The book starts off with many rules options that could fit into most systems without a problem. It then delves in too many background options for campaign use. There are many tables to roll on for more options that can affect overarching storylines or everyday adventuring. Some examples of the tables are permanent injury table, magic sword origins, personality traits, dimensional gateway table and of course a wandering monster table. A unique version of the monk character class is provided. In the back of the book there are details on the magic items and new spells that will be found by adventurers on the islands.

The “meat” of this book is detailed hex by hex, with corresponding numbers to show locations of creatures, NPCs(non-player characters) treasure and magic items.  The world will unfold for adventurers as they explore the island one hex at a time. Many extreme dangers exist but the rewards can be great. The book contains 117 hexes, in each hex there is something new to explore and most likely not even experienced players will know what to expect.

The encounters range from typical high fantasy to science fiction to some that are extremely bizarre and quite unique. A goal can be given at the start of a campaign to give the players a reason to search the islands or players can just wander hex to hex throughout the campaign. Both work fine as there is so much to do on the island.

When I originally received this book I planned to use it as a guideline for use in writing one shots for conventions. I had no idea what to expect as I have not read any of the work by this author. As I read through the options in the front I found I liked some and didn’t like others but as stated they are options and you only use what you like and disregard those you don’t. Getting into the book and reading through all the adventures that are contained, I became more and more excited about using this book. This is not your typical dungeon crawl or plot point campaign. Many of the ideas presented are very unique and not just your typical “what monster’s around the next corner.” Each mini adventure for each hex gives you enough information to run each adventure but is left open enough that you can go in many different directions from one idea.

If you are looking for a plot point campaign that tells you what to do at every moment of the game this book is probably not for you. If you are looking for a book that can be used for a campaign, used in one shots or just to pull ideas from, you won’t be disappointed in picking this up.  One thing I love about this book is the uniqueness of the adventures some are extremely bizarre and all are entertaining. Players after the game have told me how much they enjoyed the story lines that came out this book. I highly recommend The Islands of the Haunted Putrescence and will be using it more in the future. I will certainly be picking up more of the work from this author. Running The Purple is an experience both you and the players will enjoy.