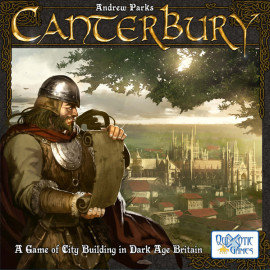 Getting an opportunity to play a pre-production copy of a game can be very exciting. It can also be very scary. For starters, the designer or publisher is almost always enthusiastic about their game. Their enthusiasm is what fuels your excitement to play the game. However, there is that feeling of of fear because you know there is always a chance the game you are about to play might be complete garbage. Or, it could just be that the game isn't your cup of tea (style).

I've been in that seat before. It can be uncomfortable when the question is finally asked.
"So, what did you think?"
I've also been the one asking so I know that as a designer, you want the most honest of answers. It still doesn't make the situation easier if it was a bad game.

Of course, that's looking at the negative side of playing a pre-production game. The positive is that you might thoroughly enjoy it. Now all you have to do is wait patiently for the final version to hit the market.

When I got the invite to try Andrew Parks "Canterbury", I was definitely excited. I've been lucky enough to be able to try out Core Worlds and Core Worlds Galactic Empires in pre-production, and that game remains my favorite deck building game.

Still, I knew Canterbury was a bit different than the more recent Quixotic Games designs. It is clearly a more Euro-Style board game, and a style I was unfamiliar seeing from the designer. The fear of uncertainty was definitely there.

But what was the end result? Well, I probably wouldn't be writing about the game if it was negative. Finally, lets just get into the review 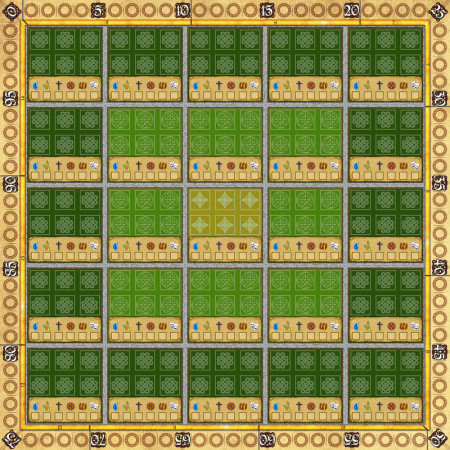 Canterbury is a medium weight European style board game where players will be rebuilding the districts and trying to make Canterbury into a prosperous capitol. The game has a fairly simple design that it is complimented with very enjoyable and elegant mechanics.

The city (game board) is laid out in a 5x5 grid. Each grid represents a different district. Each district is then laid out in a 2x3 grid, with the top two rows (6 spaces) being the areas players will be building on, and with the bottom row broken into six smaller spaces showing the six possible services that a district can provide. The possible services of each district are water, food, religion, militia, income, and entertainment.

There is a depth to this game that really can not be described in words, especially when I tell you that a player only has three actions to choose from on their turn.
1. Full Build: this allows the player to build up to 2 small buildings and/or medium buildings or 1 large building.
2. Levy Funds: This allows the player to gain gold. (Gold is used to build structures.) The amount of gold received is determined by the city treasury which increases along side the city prosperity. * A player that Levees funds MUST take a full build action their next turn.
3. Tax and Build: This is a combination of the first two actions which allows a player to take half the available funds and also build 1 building.

One of the more innovative and sleek mechanics of the game comes with building in the districts. As I said earlier, buildings provide services, but the services must be provided in order and buildings can not be built unless all the proceeding services are provided. For example: A well provides water and a garden provides food. The garden can not be built unless water has been already provided. 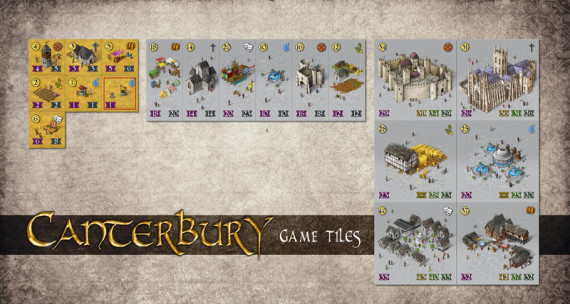 Small buildings provide services only to the district they're built in. Medium buildings provide for the district they're built in and also to each adjacent district. Large buildings also provide their service to any 5 districts in the city. When a building is placed, the current player pays its cost in gold, and then places a marker (cube) of their color to indicate they were the ones who provided the services. Then, they increase their prosperity and the cities prosperity as indicated on the building tile. Obviously, the larger the building, the higher the cost, but greater is the prosperity.

A side board, called the Kings Bonus chart, is also a contributing factor in the outcome of the game. On this chart, there is a track for each of the six services. Players will be increasing their position on these tracks every time they provide services. Game end scoring will add additional prosperity to the two top players who have provided the most service in each of the six services. This is a track you need to make sure you are paying attention to throughout the game.

The final way to earn large amounts of prosperity is by earning district favor. (There are a few other ways to earn prosperity such as “breaking ground” bonuses and “enrichment” bonuses, but I won't cover every rule here.) District favor is earned by looking at each of the 25 districts separately . The player who provides the most services in the district will score bonus points based on the number of filled building spaces. (max 6) The player with the second most will also score half that amount. The district favor bonuses are scored three times during the game when the city prosperity track completes a turn around the board. Judging when this will occur is yet another key factor to keep your eye on.

Canterbury is a game that gives you simple choices that provide you with a magnitude of options on how to execute them. Your approach, tactics, and planning of these options will ultimately provide your fate. However, even with such critical decisions on my plate, I never really felt bogged down in the process. The game play always flowed smoothly and  no mater which options I had to choose from, they all just made sense. Other players actions may cause you to change your plans of attack, but that's one of the beauties of it all. It keeps it fresh and engaging.

Overall, I had a very enjoyable and satisfying experience with Canterbury. I am very much looking forward to its production and another opportunity to become the Saxon Lord of Canterbury!

* Canterbury will be hitting Kickstarter on May 1st 2013!﻿