You and your fellow Heroes of Legend sit down for a peaceful dinner in Haven Town, and someone comes in screaming about Shadowrifts opening in the woods and unspeakable evils pouring out of them. The villagers obviously can't handle this threat. Their guardsman are just corpses waiting to happen. they need heroes. They need you! 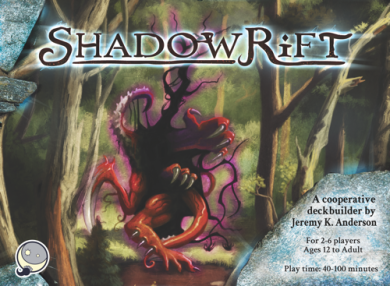 Every time a new deck building game hits the market, I always hear the same phase uttered in some form or another; "This one is different!" Because of the smaller exposure of Shadow Rift, I heard this being said in more of a whisper from the back of the room.

Knowing that Shadow Rift is a Co-op and how much my group was enjoying Marvel Legendary, I decided it was time to see if the game really is "different". Of course, different is not what I want in a game. (Well it helps a little.) I want the game to be good. Well, is it? You should keep reading and find out.

My biggest problems with Shadow Rift take place in the earliest of stages. First, after unwrapping all the cards (There are a whopping 500! Which by the way are good quality but a tad undersized) they need to be sorted. However, being unfamiliar with the game, I had no idea what the cards are. Which brings up the next negative issue. The rule book. It's very small and only 8 pages .There are very few illustrations. I tried to just go through setup but It says things like "choose a monster faction" and "select 8 stacks of hero cards".

There is no components breakdown, so I had no idea how many monster factions there are, or how many cards for each. I didn't know what cards are hero cards. The only way I could finally sort the cards is because the game comes with these much needed dividers. The dividers have the card types and card names on them. There were still a few groups are cards I had to piece together some more rules to figure out what they were.

Next, figuring out the rules was not much easier than sorting the cards. I ended up finding a game play video and watching 20 minutes of that and it drastically helped my setup and understanding of the rules.  The video link is below...

Finally, there's a post on BGG with a few Game errata from the designer and some of the errata is a drastic change! Here's the link to that... 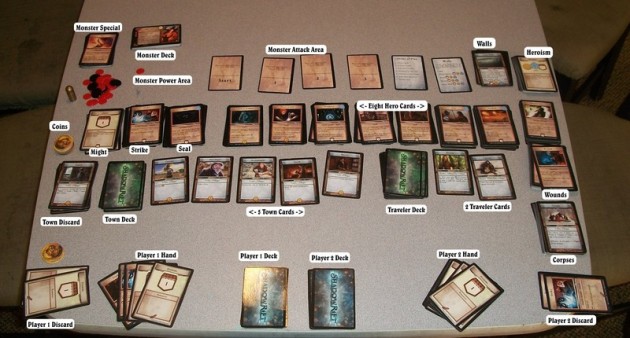 Ok, that all seems pretty bad right? Well, I guess it is. But keep in mind this is the first release from this publisher. This is not a Fantasy Flight or Days of Wonder with multiple editors and a huge professional staff. Small company games deserve some leeway. So I give it to them. And guess what  It's pretty much all up hill after this!

I'm not going to tell you how to play Shadow Rift, but talk about some areas of interest. I doubt anyone reading this is unfamiliar with what a deck building game is so I'm not going there either.

In Shadowrift, you are cooperating with each other trying to fend of the evil creatures emerging on the outskirts of town while trying to keep the body count low and the infiltrators out.  The main resources in this game are coin, prowess, and magic. These resources are used in an incredible wide range of ways from purchasing skills and powers, attacking, healing, recruiting, building, sealing, and more!!! The choices you have to make on a single turn are far greater than the choices I have ever see in a deck builder to date. Diversity is Shadow Rifts strongest mechanic!

A unique power point system is used to bring the monsters into play. Once in play, the monsters will make a series of attacks at either the players themselves (forcing wound cards into your decks), the towns fortifications or at the townsfolk. If not dealt with quickly, monsters can cause troubles to grow. Monsters that escape add even more to the power point system.

Another reason to kill the monsters is that they award Heroism cards. These cards are essentially a wild resource card that also allows you to draw another card. 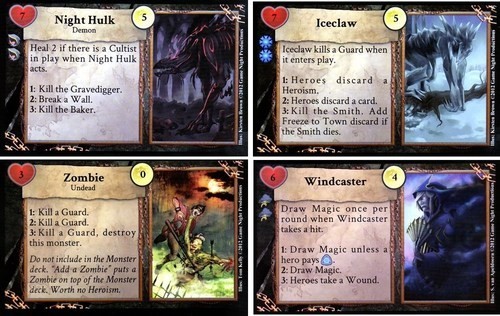 The town has its own deck that is treated almost as if it is another player. (And probably could be played by a player) One of the toughest decisions is, are you going to spend this turn strengthening your own deck, or strengthening the town deck? 5 town cards are flipped each  round and  there are two travelers revealed each round. Traveling Infiltrators go directly into the town discard and must be dealt with when they appear. Other travelers are helpful but must be obtained with resources by a player to become part of the town deck. Of the face up townsfolk cards, each player may get help from one of them. As monsters kill townsfolk they get replaced with corpse cards. Flipping the 5 town cards and revealing only corpses or infiltrators is one of the losing conditions. This forces you to pay attention to what's happening here.

There are dozens of hero cards but only a few are used each game. These cards are physical and magical attacks as well as skill cards. What's unique about skill cards is that once played, you can keep them in play as long as you have the prowess points to do so.

You can win in two ways, either build up enough fortifications in the town (called walls) or seal all the Shadowrift cards in the monster deck. (There is 1 per player shuffled in) It does seem like going for one or the other is your best coarse of action. I've noticed however that at some point in the game there is a swing. Not saying that's a bad thing. If you're doing well, it should happen. Everything is very tight and looks bleak early on in the game. But if you play well enough, you should really start seeing your deck work for you and hopefully the town as well. You'll really feel like your hero has beefed up and gotten more powerful.

Getting those heroism cards is very important. In a smaller player count games you'll actually be getting more than you would when playing with a full compliment of 5. I've read that the game is a bit easier with two than with five and it's probably for this reason, but like most co-ops, the ability to increase or decrease difficulty is here.

For a deck builder, it is rather fiddly. Each round you're adding tokens to the monster power point pool then spending them to bring in monsters. You're discarding the village cards from the previous round and dealing out new ones (often having to shuffle the village discards), then you bringing out two new travelers (also needing to reshuffle these discards as well), then you are doing your turn end of discarding / drawing / reshuffling. I suggest that you divvy out these steps to different players. Have 1 player deal with the monsters and 1 player deal with the village.

I have to say that the theme here comes over extremely well. It really feels like all this stuff is going around you and you're part of the village. Core Worlds and Legendary are the only other two deck builders I feel that really pull off the theme. (Yes, I feel this game does the theme  better than Thunderstone.)

So, are you looking for a deck builder that is different and good? Then check out Shadow Rift!