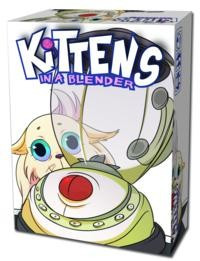 Horrible, gruesome, terrible, disturbing and sick are all words to describe the theme of Kittens in a Blender, or so you may think.  But after you see the box cover and upon further inspection of what is inside you will realize this game cannot be described as any of those words.

It is a very simple game.  The instructions are only one page, most of which is explaining cards that are already self-explanatory. The game is for 2 to 4 players. Each player picks a color.   There are 16 kitten cards for each color.  The object is to keep as many of your kittens safe as possible, at the same time sending your opponents kittens to the blender.

The box itself becomes part of the setup.  Oversized cards, one is “The Blender” the other is “The Box”, fit into the lid and bottom of the box. These are placed on the table with some space in between that will be “the counter”.  Players start the game with 6 cards and will always draw up to 6 cards.  Each turn players will play 2 cards.  Kitten cards can be played anywhere (blender, counter or box).  Some cards can move kittens. Others like “Dog’s in the Kitchen” force player to pass card hands around.  The two other main cards are the Blend and Blend/pulse.  When a Blend card is played all kittens in the blender will blended (ok maybe it’s a little sick) and are placed underneath they will be worth -1 points at the end of the game.  All kittens in the box are safe and are placed underneath they are worth 2 points.   Blend/pulse can be played just like a blend card except they can also to cancel a Blend card thrown by an opponent.  The game continues until all Blend and Blend/Pulse cards have been played.

Overall I enjoyed the game.  It’s a light crazy themed game.  The game is fast and can be cut throat.  It was fun sending opponent’s kitten to the blender.  One problem I had is especially early on in the game it always seemed that someone had a Blend/pulse card every time someone tried to play a blend.  If you’re in the mood for a game that is a bit different, plays in 20 minutes, and is good silly fun, give this game a look.